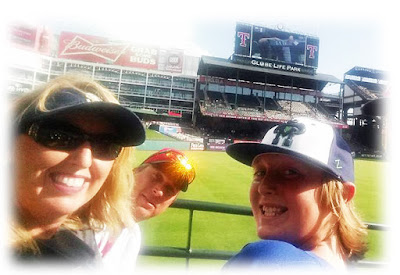 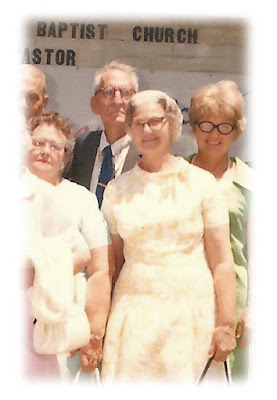 This final picture shows Leroy with his wife Nola Gower in front of him, surrounded by some of their church friends at the Balboa Park Baptist Church. This picture was probably taken in the late 1960s or early 1970s. They were committed, long time members of this San Diego congregation.
- - -
Steve Shepard
Posted by Steve Shepard at 4:46 PM No comments:

I believe that what we become
depends on what our fathers
teach us at odd moments,
when they aren't trying to teach us.
~Umberto Eco

On this weekend of Father's Day I am especially mindful of, and grateful for, two men: my own father and the father of our grandchildren. My dad Eugene Shepard died in 2003 but lived a wonderful life and left a great legacy of family love and devotion. Our son Nathan is an outstanding father who makes us very proud on this weekend to remember all fathers. 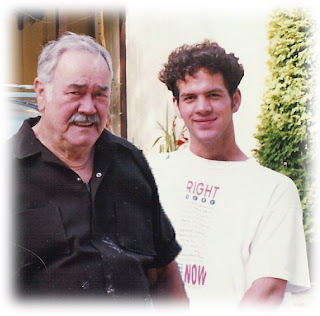 This first picture shows my dad Eugene Shepard and our son Nathan Shepard in 1996 in Anacortes, Washington.

Below is a slide show honoring all the fathers past and present in our Shepard and Gower families. Pictured are young fathers, old fathers, dads from long ago and dads who are very new to the task. At least one is a father of five kids, while others are fathers of just one or two. Some are steady and hard working, others are just thrilled at the very idea of being dads. Some have been at it for many years and now revel in the joy of "grandfatherhood", while others are still learning how to be the best dad they can. Some do a great job of being step dads, while others face unique and daunting parental challenges.

All the fathers pictured here are to be thanked for their hard work and the loving guidance they give their kids.

Happy Father's Day to all of you who have taken on the great task of being a dad!
- - -
Steve Shepard
Posted by Steve Shepard at 1:07 PM No comments:

If you look deeply into the palm of your hand,
you will see your parents and all generations of your ancestors.
You are the continuation of each of these people.
~Thich Nhat Hanh

Generations Apart, One in Heart. Four birthdays are celebrated this week in our larger family. I thought it appropriate to highlight their birthdays by including pictures of each birthday person with their grandparent, or in one case, with their grandchild. In all four pictures, the pairs are approximately the same age.


In this first picture, Emma's image (left) was taken on her birthday earlier this week. On the right is her grandmother Beverly Russell in a picture that was taken in San Diego almost 70 years ago, in 1947. At the time of Beverly's photo she was about the same age that Emma is now.


In the picture above, Beryl's image (on the right) is coupled with the image of her granddaughter Kaylan Shepard, daughter of Dane and Cindy Shepard of Blanchard, Oklahoma. Beryl, in military uniform, served during World War II, which is when this picture of her was taken, while Kaylan's picture was taken earlier this year.

Scott Ortiz and Thelma Shepard Boyd. This coming Monday, June 13, is the 31st birthday of Scott Ortiz of El Cajon, California. He is the second son of Kim Boyd Clark and her late husband Gabe Ortiz.


This picture shows Scott on the left in an image from a picture taken earlier this month. The right half of this picture, taken in 1958, shows Scott's grandmother Thelma Shepard Boyd when she was about the same age that Scott is now and living in San Diego. Thelma lives today in Blue Springs, Missouri, not far from her daughter, and Scott's sister, Kim.


This composite photo shows Kambree on the right, from a picture taken very recently. The image on the left is a picture of her grandmother Kerri Shepard Aquiningoc, taken in 1971 in San Diego when she was about the same age that Kambree is now. Kerri lives today in Weatherford, Texas.

Happy Birthday and best wishes to each of the birthday people pictured above!

These pairs are presented in this way not just to generate some nostalgia, especially among those of us who can remember life years ago. But this also highlights the important relationships between the generations. Being two generations apart sometimes suggests distance and separation, but the fact is that there are connections that cannot be denied, connections that are significant whether or not the two relatives ever met.

Look closely with eyes of discernment and you can see the connections in the images above, in the eyes, in the hair, in the smiles. All of this is one more reminder that our lives, minds and hearts are inextricably intertwined with our ancestors, even if that ancestor is only two generations away.
- - -
Steve Shepard
Posted by Steve Shepard at 3:21 PM No comments:

It is not easy to be a pioneer
- but oh, it is fascinating!
I would not trade one moment,
even the worst moment,
for all the riches in the world.
~Elizabeth Blackwell

Three celebrations are in order in our family this day. Two are contemporary, one is a remembrance from long ago, involving stories of a genealogical nature and of historical interest.

James Brooks Davis (1870-1928). Today is the anniversary of the birth of my Great Grandfather James Brooks Davis who was born on this day in 1870 near Spencer, Indiana. He was the much admired father of my Grandmother Bura Davis Shepard, who chose her father's birthday as the day to marry William Shepard in 1915. James died at 58 years old, also in the month of June, but in Beaver County, Oklahoma. 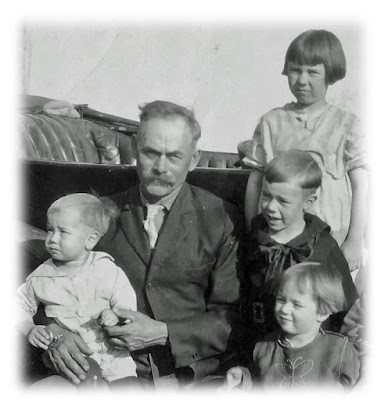 Jim Davis was the brave soul who, after living in Indiana all his 43 years, and after being a 3rd generation Hoosier, packed up and moved west in 1913 to Beaver County, Oklahoma, some 900 miles away. He migrated with his wife Callie (also a native Indianan), their 7 children (ages 5 to 16), AND his wife's special needs brother Clayton Spear. To pack up and move a family that size and configuration required a pioneering spirit. It was something between "rather crazy" and "incredibly ambitious."

But Jim Davis was from pioneering stock; it was in his blood. His grandparents Alexander and Jane Davis had braved the American wilderness some 60 years earlier when they migrated from Monroe County, Ohio to Owen County, Indiana. And they did so with several young children, including my Great Great Grandfather Charles Davis! The stories of their adventures must have been the stuff of many a conversation around Davis dinner tables during James' early years. We remember him, on this his birthday, with admiration for his love of family and his willingness to dream of a better future. He is buried today alongside his wife Callie in Sophia Cemetery in Beaver County.

The picture above shows James Brooks Davis in 1923 with 4 of his grandchildren, Eugene, Pauline and Elmer Shepard, and Geneva Kilpatrick. 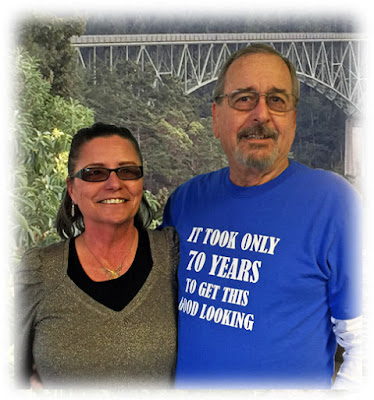 Happy Anniversary Gary and Cindy. Today, June 2, is the 37th anniversary of my brother Gary Shepard and his wife Cindy Dillon Shepard. Happy Anniversary to them! Gary is one of the Great Grandchildren of James Brooks Davis.

He and Cindy were married in 1979 in Southern California where they lived for the first 34 years of their married life. Today they live in Oak Harbor, Washington just a short drive from Anacortes, Washington where our mother Maida Shepard lives. Cindy and Gary are very helpful in caring for mom who, as she moves into her 90's, is requiring more and more care and attention from her family. 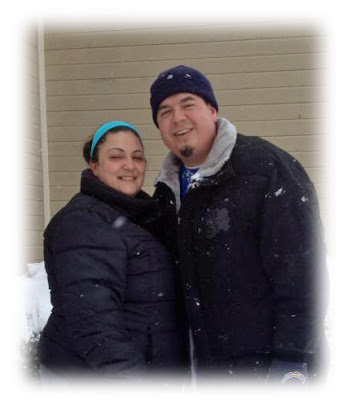 Happy Anniversary Jeremy and Desiree. Yesterday was the 14th wedding anniversary of Jeremy and Desiree Ortiz. Jeremy is one of the Great Great Grandchildren of the aforementioned James Brooks Davis. He is the oldest child of Kim Boyd Clark of Blue Springs, Missouri and lives with wife Desiree and their 5 children in El Cajon, California. Best wishes to them for a happy anniversary!
- - -
Steve Shepard

Posted by Steve Shepard at 11:40 AM No comments: