A good many family trees are shady.
~Robert Gonzales


Happy Birthday tomorrow to our grandson Logan Alexander Shepard of San Diego. Born in San Francisco in 2011, Logan is now finishing up third grade in public school. Like all kids in San Diego schools these days, he is engaged in distance learning. He interacts with his teacher and classmates by video conference, and does much of his learning on his personal computer. The Corona Virus is making this a very different school year for everyone, a year that none of us will forget.

Despite the shut-down that is affecting us all, we are planning a happy celebration for Logan's birthday tomorrow. The following is a music video celebrating his 9th birthday. These images of Logan were taken over the course of the last year.


Happy Birthday Aunt Thelma! Today is the birthday of my aunt Thelma Shepard Boyd. Born in the spring of 1936, Thelma is the youngest of the last three members of her generation in our family. The other two are my mother Maida Shepard of Anacortes, Washington, and Maida's sister, my aunt Vicki Gower Johnston of Chandler, Arizona. Those three women are the senior members of our family and are to be honored for their place in our larger family. 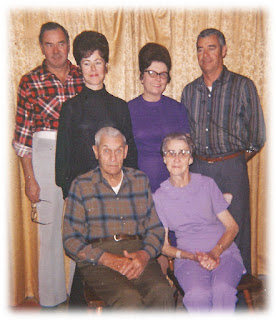 I connected with my aunt Thelma earlier today. Unfortunately she is in Grossmont Hospital here in San Diego having had some surgery. She is planning to go home soon. I assured her that being in the hospital is not the best way to spend her birthday. She agreed. Best wishes to Thelma for a speedy recovery!
The picture on the right shows Thelma (second from the left) with her three siblings and her parents in San Diego in 1973. This was one of the last pictures of these 6 all together. Granddad passed away in 1976, just 3 years after this picture was taken. Also in the 70's Eugene and his family moved from San Diego to Washington, while Elmer and his family relocated from San Diego to Texas. Sitting in front are Thelma's parents William Shepard and Bura Davis Shepard. Standing in the back are their children, Eugene Shepard, Thelma Shepard Boyd, Pauline Shepard Russell, and Elmer Shepard.

Birthday boy Logan, who is pictured above, is one of the 25 Great Great Grandchildren of William and Bura Shepard. Those 25 are dispersed throughout San Diego, the Seattle area, North Texas, and Northeast Kansas. They range in age from 30 years old to 1 year old. Unfortunately Will and Bura Shepard were two people Logan never had the opportunity of meeting.

My aunt Thelma is our last remaining family link to Two Buttes, Colorado, a small town in the Southeast corner of that state, where our Shepard family lived from 1928 until 1940. Thelma was born in Two Buttes but moved to San Diego with her family in the fall of 1940 when she was just 4 years old. In 1958 she married Terry Boyd (1937-2013) in Southern California and with him had two children, Kim and Darren, who were raised in San Diego. Thelma lives today in a comfortable apartment complex in El Cajon, very near some of her 6 grandchildren who assist her as needs arise. Best wishes to Thelma on this, the occasion of her 84th birthday!

Related Celebrations. Today also happens to be the 30th birthday of Thelma's Granddaughter Courtney Boyd Slaughter who was born in 1990, on her grandmother's 54th birthday. And to make it a trifecta, today is the 36th birthday of my nephew Christopher Shepard of Seattle, the son of my brother Darrell and his wife Mary. Best wishes to all of them!
- - -
Steve Shepard
(he, him, his)
Posted by Steve Shepard at 8:47 AM