A Visit To Philippi

I was in Philippi not long ago. Not the one in West Virginia. Nor the one in Georgia. But the one in Greece. The original Philippi. It is about a 2 hour drive east of the second largest city in Greece, Thessaloniki.

Philippi was actually named Krenides in the beginning, in the late 4th century BCE. I have heard of the city of Philippi all my life because of its importance in the travels of the apostle Paul, but never knew till our visit that “Philippi” was a name forced on this community by the Roman emperor Philip II.

Only a few years after the town was formed, Philip decided it would make a good place for his headquarters, so he set up shop there and named it after himself. If you are emperor you can get away with those kinds of things, I suppose. Surely there were those who would have preferred that it keep its original name, which had not been in use very long. But when the emperor chooses your town for his home and for his name, you don’t have much say. So for all these years the town's name has been Philippi.

Interestingly when Philippi was abandoned several hundred years ago (after yet another devastating earthquake), the people started a new town next to it, and gave it the name Krenides, which it still has today.

When I was in in this beautiful Mediterranean community recently it was a warm day in late September. My wife Cindy and I were in Thessaloniki on vacation and at the last minute decided we had time to visit this ancient city. It was easy to find. We drove less than 2 hours east on the toll road, being careful to stay out of the fast lane where 95 mph vehicles will run you off the road without thinking twice about it. We left the freeway at Kavalla, the modern name for the first century coastal city of Neapolis, which is mentioned in the Bible. Philippi is just a dozen or so kilometers (about 7 miles) from the coast and would have been an afternoon’s trek for an ancient visitor like the apostle Paul. 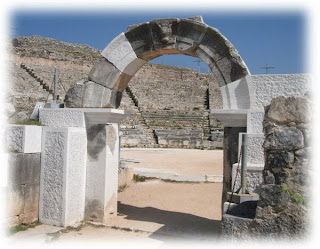 We drove into the parking lot of this archeo- logical site and found a parking pace with ease. There was parking for hundreds of cars, but on this day we were one of less than a dozen. Before the entrance to the site itself there is a snack bar and shop where you can enjoy a cold drink and buy a book or a curio relating to what you will see. At the entrance there is a booth where attendants collect the 3 Euros it costs to walk around the grounds, which cover a surprisingly large area.

One of the first sites we saw was an arena. I do not remember this being mentioned in the book of Acts. Paul did say that he had fought with wild animals on occasion, but he did not mention fighting with them at Philippi. This Philippian arena had been used for many years throughout history and came complete with the Gladiator's entrance, the wild animal's entrance, and seating for thousands of spectators. (see first picture) It was not hard to imagine the courageous gladiators, the blood that flowed, the animals that died, the exciting battles and the thrill of the spectators. 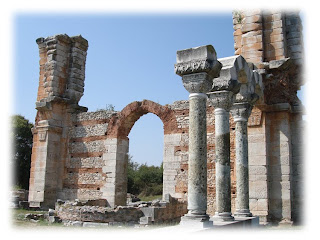 There was a significant amount of serious archaeo- logical investi- gation taking place in all the many locations around Philippi, but our interest the day we were there, was purely casual. It was inspiring to realize that this was the very place where Paul established the first Christian community on European soil. We were impressed as we viewed the ruins of a larger than expected church that had been built in the 3rd or 4th century. (see second picture)

Overall the experience we had that day helped to complete the stories I had heard about Paul’s visit to this city -- his wonderful friendship with Lydia, his meeting with some worshipers "down by the riverside," his unexpected imprisonment with Silas, and his experience of a devastating earthquake.

One of the more popular sights one can see 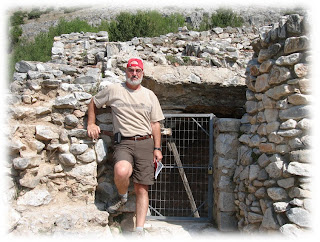 among the ruins is the traditional location of Paul's incarcer- ation referred to in Acts 16. (see the third picture) The informative signs posted nearby make it clear that this location is but a good guess. People want so badly to know exactly where Paul had been imprisoned that they have chosen one particular location, even though the historical evidence is not there for archaeologists to be convinced. It illustrates the tension between those who make religious pilgrimages to Philippi and those who come here with purely secular or scientific interests.

We finished our visit this warm September afternoon and drove away grateful we had the opportunity to add this visit to our busy itinerary. It gave us a connection to the stories of the New Testament that we would never have had otherwise.

Click here to see pictures of our trip to Greece, including Philippi.
Posted by Steve Shepard at 4:39 PM No comments: