This last week of 2016 includes a couple of anniversary celebrations worth remembering.

Our Wedding Anniversary. Today, December 27, is the wedding anniversary of Cindy and me. On this day 48 years ago we were married at the La Mesa Church of Christ, just a few miles down Jackson Drive from where we live today. My second cousin Edwin Kilpatrick was the minister, dear friends and family were the attendants, while Joe and Paula, and Gene and Maida were the proud parents, each of them just 40-something years old. Johnny Mathis provided the music (unfortunately not in person) and the ladies of the church provided the reception of punch and cookies and, of course, the wedding cake. 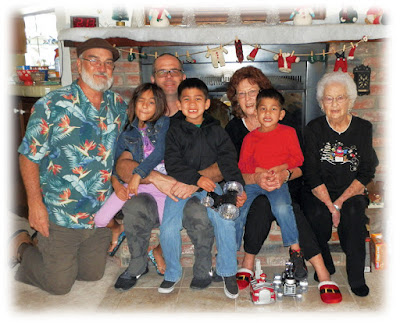 A lot of rushing water has gone under the bridge of our family since that Friday night so long ago: a lot of joy, our share of sadness, celebrations of significant milestones, the arrival of one child and three grandchildren, years of labor-intensive careers, new relationships, amazing changes, surprising growth, and valuable challenges. They have all made the last 48 years very memorable.

The first picture, taken at our Christmas Day gathering on Burgundy Street in San Diego, shows Cindy and me with our son Nathan, our three grandkids, Preslea, Logan and William, and Cindy's mom Paula Harris.

This evening, to celebrate our anniversary, we will share a quiet dinner together at a restaurant over looking beautiful San Diego Bay. Among other things we will raise a toast as we give thanks for so many of you, family and friends who have brought us to this point in our lives, and who have helped make the journey worthwhile. 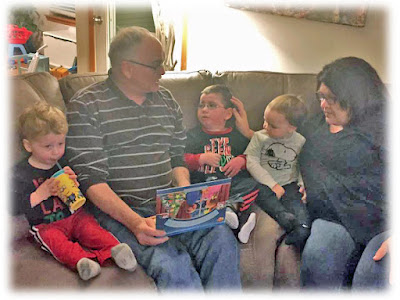 Happy Anniversary Darrell and Mary. This coming Saturday, Dec 31 will be the 34th wedding anniversary of my brother Darrell Shepard and his wife Mary Medina Shepard. Darrell and Mary were college students at Abilene Christian University when they got married on the last day of 1982 in Abilene, Texas. Their life journey has taken them from the plains of West Texas to Montana, Oregon and now Washington State, where they live today. Their family includes 3 children, their partners, and 4 young grandchildren. Happy Anniversary and best wishes to Mary and Darrell!

The second picture, taken Christmas Eve, shows Darrell and Mary with three of their grandchildren, Mason, Logan and Kellan. Darrell: "Thirty four years sure go by fast! Oh, and the grand kids are awesome."

Truth Is Stranger.  I went Christmas caroling with a group from our church just before Christmas. One of the places we wanted to go -- a care facility where one of our members lives -- told our leaders that we could come and sing, but just holiday music. We were to sing no songs that had any reference to Jesus Christ or to religious themes. There were people of other faiths in the facility. (I am not making this up!) It was enough to turn the brightest optimist into a cynic. Fortunately, we had plenty of other places to go and sing. And a good time was had by all.

May this coming weekend of New Years Day be a happy time of celebrating family and friends! Best wishes to all of you for a joyous and prosperous new year!
- - -
Steve Shepard
Posted by Steve Shepard at 10:18 AM 1 comment:

How shall a person escape from their ancestors,
or draw off from his veins the black drop
which he drew from his father’s or mother’s life?
~Ralph Waldo Emerson

Blessings and best wishes to all of you on this week leading up to the Holiday. Merry Christmas to each of you and your family!


William Shepard (1888-1976). This coming Christmas Day is the 128th anniversary of the birth of my Grandfather William Shepard. Our Shepard ancestry is firmly rooted in 19th century Indiana and Illinois, the latter being where Granddad was born in 1888. The Shepards then migrated to Oklahoma and Colorado in the early 20th century. But thanks to Granddad William, our Shepard family has now been settled on the West Coast, in particular in San Diego, for more than 75 years. He and his wife Bura Davis Shepard moved their small family to San Diego in 1940 and some of their descendants have lived here ever since. Granddad William died 40 years ago here in San Diego at the ripe old age of 88, yet he remains an important part of our family history. I am grateful for his life and legacy.


Pauline Shepard Russell (1916-2000). I have recently shared a couple of posts about life in our family 100 years ago. I'd like to take that theme again today. Exactly a century ago, on Christmas Day 1916, William Shepard turned 28 years old. Just three days later, on December 28, his wife Bura gave birth to their first child, Pauline Shepard. At the time they were a struggling young farming family, trying to make it on their own in Beaver County, Oklahoma. At home on a cold winter's day, they rejoiced in Pauline's arrival, the first of four children. It was a joyous celebration of new life, and a time to anticipate even more children, and then grandchildren -- and even some great grandchildren -- who would bless their lives. They would live to celebrate their family's growth to several dozen members, but it all began with Pauline's birth on the cold plains of Oklahoma 100 years ago, in the winter of 1916.

Evolution of a Blog. The Shepard's Crook has evolved over the 9 years that it has been in existence as a family-genealogical blog. It was the last Friday in December, 2007 that I began this blog to research the history of our ancestors and to celebrate their lives and descendants. In that period of time this blog has undergone significant evolution. Over these years I have learned a great deal about how to do family research and have gained more insight into family history than I ever thought possible.

In these past 9 years I have shared over a thousand pictures of contemporary family as well as family from long ago. And I have reported here on research into dozens of ancestors. It has all been very enjoyable and richly rewarding for me. From the beginning, The Shepard's Crook has been a labor of love, and will continue to be so.


In recent months I have had to cut back on the amount of historical research I have done. Family commitments and other personal concerns have brought me to the point where I simply cannot spend as much time with online research, resulting in fewer postings. That trend will probably continue. I remain committed to posting on a regular basis, but it will be less often than it has been over the years.

Two relationships have been central to this change in Cindy's and my life. One has been our 3 grandchildren, to whom we have given significant time and energy as we have supported our son in his parenting responsibilities. And the other family concern is my mother Maida Shepard, who at 92, is requiring more attention from all her children than ever before. Even Cindy and I, though separated by many miles from the family in Washington State, need to do our part in attending to the needs that mom has in these last years of her beautiful life.
- - -
Steve Shepard
Posted by Steve Shepard at 4:39 PM No comments: 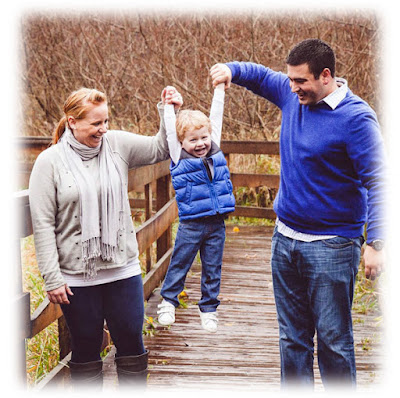 Here is a lineage that shows our family line from our son Nathan Shepard to Laurens Van Buskirk and his wife Jannetje Jans Van Buskirk.
- - -
Steve Shepard
Posted by Steve Shepard at 5:33 PM 1 comment: