For each petal on the shamrock,
this brings a wish your way:
Good health, good luck, and happiness
for today and every day.
~Irish Blessing

Discovering An Irish Connection. Before this Irish month of March is over I want to mention a recently discovered Irish connection. Dee Shannon is the wife of my cousin Joan Shepard. Ever since I met Dee a few years ago I have wondered about her last name and whether or not there might be an actual historical family connection. Shannon is a very common name, so I did not pursue the matter at first. But after some recent research I did find a connection, due in large part to the help of the book Shannon, by the late Dexal Ray Shannon.

I have mentioned the Shannon book before in this blog. It was self-published in 1990, just a year before the death of the author, who was a 3rd cousin of mine. (He was a 1st cousin of my Grandmother Nola Shannon Gower.) A number of those among our Shannon kinfolk have the book. In recent years I have discovered that it is increasingly in high demand among genealogists in general. It is a great resource for family history research, cataloguing thousands of Shannon descendants in America. I do not know if copies of the Shannon book are available for purchase anywhere. If someone reading this post has information about the book's availability, please let me know by email or by posting in the comment section. 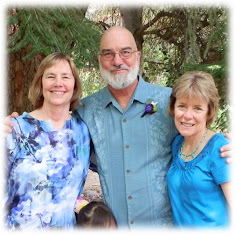 Thanks to the Shannon book and other online research, I discovered that Dee Shannon and I are both direct descendants of the Irish couple Robert Shannon Sr. (1630-1724) and his wife Annel Wood Shannon (born 1635). Four of their sons migrated to America from Ireland about 1700. One son was Thomas Shannon, from whom I am descended through my maternal Grandmother Nola Agnes Shannon. Another son was William Shannon from whom Dee is descended through her maternal Grandmother Marie Margaret Shannon. Dee and I are therefore 8th cousins, sharing a common and proud Irish heritage.

Another Cousin Connection. In recent weeks I have also discovered another new cousin, this one on the Shepard/Davis side of my family. My paternal Grandmother Bura Davis Shepard (1896-1986) was the granddaughter of Malinda Wright Davis (1846-1920). Malinda is our connection to a wonderful, colorful, very Quaker part of our family history. 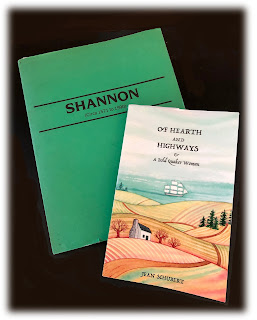 Via a comment left on The Shepard's Crook, I connected with Jean Schubert who lives on the Olympic Peninsula of Western Washington. Jean and I are both descendants of Quaker ministers Rachel Wells Wright and her husband John Wright, making her and me 5th cousins. Ministers Rachel and John had a daughter named Charity Wright Cook (1745-1822) a well known, and very well traveled, Quaker minister in her time. She may have been the most well traveled Quaker minister in all of Colonial America. I have written before in this blog about Charity and about her parents John Wright and Rachel Wells Wright. Charity's life and travels are so compelling and heartwarming that cousin Jean has written a novelization of Charity's life.

Published just last year, Of Hearth and Highway & A Bold Quaker Woman is a fascinating book about religious life in Colonial America and the adventures of one particular Quaker woman, who happens to be an ancestor of ours. It tells the story of Charity Wright Cook's deep faith and her courageous life as an itinerant minister serving the Lord far and wide. This devout Quaker woman and her family are folks from whom we are descended, which means that to some degree their story is our story. They tell us about ourselves as well as about their lives. I just completed reading Jean's book about Charity and found it both engrossing and inspiring. I highly recommend it. If you would like to obtain a copy, email Jean Schubert at jeans05@embarqmail.com. She will gladly send you all the info on how to purchase a copy.

This day always reminds me how Irish our roots really are. We have numerous immigrants in our family tree who came to America generations before our nation was born. Today is an opportunity to celebrate our Irish ancestry, and to remember those who made a great effort to migrate across the Atlantic. 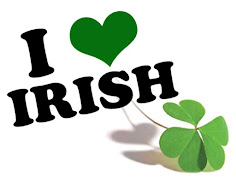 My grandmother Nola Shannon Gower (1903-2004) was the most Irish person I ever knew. There are numerous persons in her family tree -- probably more than she realized -- who were Irish immigrants to America long before she was born. Even though she was very Irish and proud of that fact, I do not remember her ever getting particularly excited about Saint Patrick's Day. As a country girl from small town Arkansas in the early 20th century, her people were hard working, pious Baptists.Numerous ancestors of ours took great risks by sailing across the Atlantic and journeying to America with high hopes for a better life. They are folks like Thomas and Eigness Shannon who came from Derry in Northern Ireland about 1700. Also James Alexander and family who came from Raphoe, in northern Ireland in the late 1600s, and John and Lucy Maxwell in the mid 1600s, and Robert and Mary Alexander who came from Scotland in the 17th century. We have a few dozen Irish ancestors who can be identified in our family history, and for them all we are grateful.A Remarkable Ancestor. Among the most interesting Irish immigrants in our history is William Henry Pickens (1670-1735) and his wife Margaret Pike Pickens (1672-1740). Originally from La Rochelle, France on the Atlantic coast, William was probably among the Hugenots, Reformed Protestant Christians who suffered severe religious persecution from the established Catholic Church in France. In response to that persecution 6X Great Grandfather William Pickens crossed the England Channel and migrated to Ireland. There he married an Irish woman named Margaret Pike with whom he had 10 children.

From the town of Limerick in central Ireland, William and Margaret Pickens obtained passage for themselves and their children and sailed across the Atlantic to the new world. In the early 18th century ocean voyages were dangerous ventures, especially for a large family like the Pickenses. From what little we know about their journey, the family survived the difficult ocean crossing safely and arrived in Philadelphia in 1722. They settled in Bucks County, Pennsylvania just north of Philadelphia.

An Amazing Life Journey. What an amazing life journey our 6X Great Grandfather William Pickens had. Born in a small French town amid religious persecution, he fled to Ireland where he settled and raised a family, before making his way across the Atlantic ocean to America. For the 18th century his was a life journey that included an incredible amount of cultural, ethnic and family transition. What an adventurous spirit!

Once William, his wife Margaret and their children settled in Pennsylvania, the Pickens family continued in their Reform Protestant tradition and joined the Abington Presbyterian Church in Philadelphia, a congregation that still exists today. As a youth in France, William was persecuted for being a Reformed Protestant. In America he and his family freely shared their faith in a new church setting. Historical records of the Abington Church show that 299 years ago, in 1722, the very year the Pickenses arrived in Pennsylvania, their 20 year old daughter Lucy Pickens married a young man named Matthew Gillespie. It was the first marriage for this family in the new world. What a joyous occasion it must have been! From that union our family line is descended:

Our proud Irish ancestry is something worth remembering. There is much more to learn about that part of our family. Today we pause and remember their place in our heritage and we celebrate all they went through to bring us to this day.
- - -
Steve Shepard

Posted by Steve Shepard at 9:47 AM No comments: