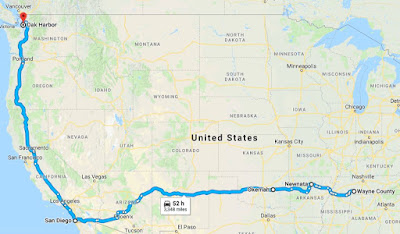 Celebrating Our Irish Heritage! Happy Saint Patrick's Day this coming Saturday! I have not mentioned for some time in this blog two of our most prominent Irish ancestors, 18th Century Immigrants Thomas and Eigness Shannon. They are my 6X Great Grandparents via my grandmother Nola Shannon Gower (1903-2004). The following is a summary of their descendants' migration across our country since they arrived nearly 300 years ago.

Virginia. He and Eigness had 5 children. Their first, Samuel Shannon (1727-1811), was born about 1727 in Pennsylvania, and is the one from whom we are descended. Samuel and his wife Jean Reid Shannon (1725-1806) migrated 400 miles westward in 1772 and settled in the frontier town of Poplar Hill, Virginia. They eventually made their way farther west to the area south of Nashville, Tennessee.

Tennessee. Samuel and Jean's first child was David Shannon (1756-1823). He was born in Virginia but settled in Tennessee with his parents. In Tennessee David married a girl from North Carolina named Jane McKnight (1759-1830), whose ancestors had also migrated from northern Ireland in the early 1700s. (Our Irish blood thickens.) Life in Tennessee after the Revolutionary War was good for David and Jane McKnight Shannon who brought into the world a total of 11 children.

Mississippi. The first of David and Jane Shannon's 11 children was David McKnight Shannon (1790-1860). He married Anna Pickens (1785-1867), who herself had several ancestors who were Irish immigrants. (Our Irish blood thickens even more.) David and Anna then migrated a couple of hundred miles southwest where they settled in Itawamba County, Mississippi.


Louisiana and Arkansas. The first of David and Anna Shannon's 10 children was David Reid Shannon (1821-1864), who married Peggy Gray (1829-1899). David and Peggy migrated to Southern Louisiana where they had 9 children. The Civil War took the life of 42 year old father David, leaving a distraught and poverty stricken widow Peggy Shannon. Her father and brothers rescued her and the children from their desperate plight in Louisiana and moved them to Stone County, Arkansas in 1867. (Read more about that touching story here.)

Oklahoma and California. The 7th child of that rescued brood was my Great Grandfather, 8 year old Samuel Pickens Shannon (1859-1930). Some 14 years after relocating to Arkansas he in turn rescued a young girl from a different kind of tragic life when he married Finetta Dearien (1861-1960). Read about their story here. The two of them bore 9 children in Arkansas, the last one being my grandmother Nola Agnes Shannon, who after marrying fellow Arkansan Leroy Gower, migrated to Oklahoma and then on to San Diego.


So there you have it: the 3 century trail of our Shannon Irish ancestors across our country from Southeast Pennsylvania all the way to California. It is one part of our great Irish heritage to remember and to celebrate this Saint Patrick's Day!

Happy Birthday to Russ and Steve. Birthday wishes today to my brother Russell Shepard and his son Steven Paul Shepard, who were both born on March 13. There is a certain symmetry about this birthday for the two of them: Russ at 56 years old is exactly, to the day, twice as old as Steve at 28 years old. Russ is a native of San Diego while Steven has lived his entire life in Anacortes, Washington. Steven and Russ (and Russ' wife Pam) live at the Shepard home on Wildwood Lane in Anacortes. They are part of the care-giving team for our mother Maida Shepard who at 93 needs plenty of loving care and attention.

Best Wishes To Jerry Clark. Happy Birthday tomorrow to my brother-by-another-mother Jerry Clark who lives with his wife Cathrina in Lubbock, Texas. Originally from Albuquerque, Jerry has lived in Lubbock nearly his entire adult life. He has been a part of our family ever since he and my late sister Linda were married back in August, 1970 in San Diego.

Happy Birthday Kerri. Earlier this month, on March 3, a very special birthday was had by my eldest niece Kerri Shepard Aquiningoc of Weatherford, Texas. Born in Walled Lake, Michigan 50 years ago (can that be right?), Kerri was raised in San Diego. She is the first born daughter of my brother Gary Shepard and Jackie Perry.
- - -
Steve Shepard
Posted by Steve Shepard at 10:25 AM 1 comment: