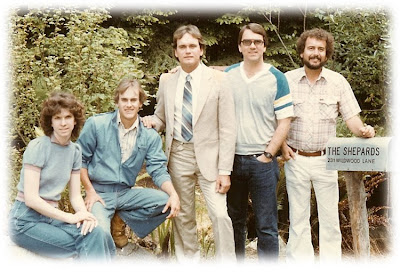 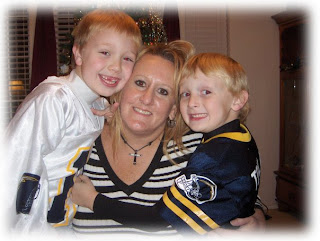 
Posted by Steve Shepard at 4:55 AM No comments:

The informality of family life
is a blessed condition
that allows us to become our best
while looking our worst.
~Marge Kennedy

Greetings to all of you from San Francisco, California where Cindy and I are visiting with our son Nathan and his wife Chenda. They are heading into the home stretch with their first baby, due in another 6 weeks or so. She will be the 9th in the generation of Will and Bura's GGgrandchildren. 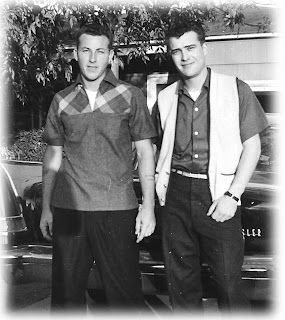 Happy Birthday tomorrow to Terry Boyd of Gallup, New Mexico. Terry has been a part of our family for more than 50 years, ever since he and Thelma Shepard were married in San Diego back in the summer of 1958.

Speaking of the fabulous 1950s, the first picture I am including shows a dapper young Terry Boyd on the left, with an equally dapper young Rex Russell on the right. Just looking at the picture gets the "Happy Days" theme song playing in my mind.

Rex is the nephew of Thelma Shepard whom Terry married just a few months before this picture was taken. The neat and clean, but cool look, the short hair, the Chrysler with large fins, and the black and white photography, are all characteristic of that period in time. Since it is dated December, 1958, and since the fellows are both in short sleeves, this picture was probably taken in San Diego. 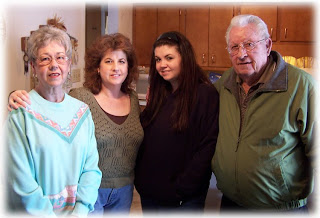 Now flash forward about 50 years for the second picture, which was taken in 2007. It shows Terry Boyd on the right, and Thelma (Shepard) Boyd on the left. Between them is their daughter Kim Clark, and their granddaughter Amanda Ortiz. Interestingly, Amanda in this second picture is just about the same age that her grandfather Terry was in the first picture.

Kim emailed me recently to say that this picture was taken at the home of Amanda's other grandparents (Gabe and Jean Ortiz) in Gallup, New Mexico. It was taken during one of trips that she and husband Jeff were making between San Diego (where her grandkids live) and Missouri (where she and Jeff live). She also said that these days her dad loves to go to the local pool and swim almost daily. He also likes playing pool and visiting with his buddies.


Posted by Steve Shepard at 5:52 AM No comments: