In my genealogical research of recent months I have focused my attention on ancestor Matthew Gower (1762-1853), one of the earliest Gowers of whom we have any record. Matthew was the GGGreat Grandfather of my Grandfather Leroy Ertin Gower (1899-1974). Or to come at it from the other direction, Matthew was the GGreat Grandson of Abell Gower, the first Gower ancestor to come to America from England.

Two recently discovered Gower cousins have helped focus my attention on ancestor Matthew Gower. One cousin is Marsha Fagnani of Calaveras County, California. She, like me, is a direct descendant of Matthew Gower. She leads a Facebook Group called Friends of Gower Cemetery (the Cemetery where ancestor Matthew Gower is buried). Their stated purpose is "to preserve and maintain the pioneer family Gower Cemetery, established in 1816, located behind the Centenary United Methodist Church on Gower Road, Nashville, Tennessee." I encourage you to visit their Facebook page to find out all about the work of cousin Marsha and other Gower descendants. Their efforts are well worth our support and encouragement. On their Facebook page are several resources related to the Gower Cemetery and our Gower ancestry. Among those resources is a list all the known Gowers that reside in the Cemetery.
Another Gower cousin I was fortunate enough to find and connect with recently is Edwina Gower from Arkansas. Cousin Edwina, another direct descendant of  Matthew Gower, has a special interest in Matthew and has collaborated with several of us in an effort to share information and learn more about this important ancestor. The rewarding work of discovering more about Matthew Gower and other Gower ancestors continues.
More Old Family Photos. As I mentioned in my last post, I was unexpectedly gifted dozens of old family photos by second cousin Norman Getz of Beaver, Oklahoma who passed away earlier this year. On the right is one of the photos of two unknown children, probably from the 1920s. Some of the photos I received are from the 1920s and 1930s and show people I know and can identify. Many of the photos however are images of people I cannot identify.
The photographs I have received are good quality for the most part and are quite remarkable really. The problem is that they show family or friends who are unknown to me. In this post I have included a few more of these images. If you recognize these folks please let me know. If you don't know these folks, just admire and ponder these compelling historic images from a couple of generations ago.
One of the people who figured prominently in the life of our family in the early part of the 20th Century was my Great Grandmother Elvira Owens Shepard Williams. She appears repeatedly in the photos that we have from that era. The group photo above on the left shows 6 folks, a few of whom I can identify. The lady on the right is Mrs. Erickson, a family friend and neighbor who appears in a surprisingly number of our old photos. Next to Mrs. Erickson, in the hat, is Cal Williams who is seated next to Great Grandmother Elvira Owens Shepard. As an older widow, Elvira married Cal Williams who was considerably younger than her. The lady on the left and the two children in the back I cannot identify. Can you?
This next picture is a better image of Elvira Owens Shepard (1865-1931) and her late-in-life husband, the young and dapper Cal Williams (1882-1968). Select this link for more about Elvira and Cal and the controversy their marriage created nearly 100 years ago. 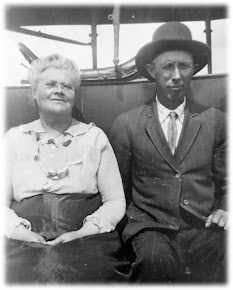 The final picture below is a compelling picture of an attractive young family posing formally yet gracefully in a setting and posture reminiscent of a number of old family photos I have seen. I recognize the wicker chair which is a type of chair I have seen in other old family photos, but I do not know who this family is. Do any of you know? I continue to sort through the many pictures I have received. In future posts I look forward to sharing with you more of the best of them. The goal of identifying all the people in these pictures for future generations is an important one. Your help would be greatly appreciated.
- - -
Steve Shepard
Posted by Steve Shepard at 1:12 PM No comments: