Tell Me Who I Am

I received word recently that my second cousin Norman Getz (1936-2022) of Beaver County, Oklahoma passed away a few weeks ago. Norman was one of the 36 first cousins of my father Eugene Shepard. Among Norman's belongings were dozens of old family pictures which were given to Lisa Parks, my second cousin who lives in Fort Worth. Lisa was gracious enough to forward them on to me. The photos are a treasure trove of images from our family's history in the early years of the 20th century. Most of them are unidentified, although some have writing on the back which tells something about the people in the photos. But as with many old photos I have seen, the words on the back don't help much. They include phrases like, "this is mother," or "this was taken after we left Oklahoma," or "this was taken last summer."

One picture that jumped out at me when I saw it, was a picture I had never seen before. It shows my aunt Pauline Shepard Russell (1916-2000) and my uncle Bill Russell (1908-1997) when they were very young. It is a picture that may have been taken when they were married in January 1935 in Springfield, Colorado. I am grateful for all these pictures from our family's history, identified or not.

Tell Me Who I Am. I am hoping that you might be able to help me put names to the people in the pictures I have. Over the next couple of months I will share with you some of the pictures I have received, in hopes that some of you can tell me who these people are.

This second picture, like the first one, may also be from the 1930s. On the back of this photo is written: "Aunt Sadie. Taken in the yard this summer." I doubt this is a picture of my Great Aunt Sadie Shepard Pruett (1892-1980). The two fellows in the picture look very much like my Uncle Elmer Shepard (1918-2012) on the left, and my father Eugene Shepard (1921-2003) on the right. The woman in the middle looks more like my Aunt Pauline Shepard than my Great Aunt Sadie Shepard Pruett. If you have some insight into these photos, I would appreciate hearing from you.

The third photo is a group picture and shows a collection of women in Oklahoma, probably in the late 1920s. The back of the photo lists the women in the picture: Sadie, Mrs. Bachman, Mrs. Esther Frass, Mrs. Erickson, Grandma, Bura, and Amelia Frass.

I am suggesting a date of the late 1920s for this photo because "Grandma" (Elvira Owens Shepard), the woman in the middle/right in white, died in 1931. Grandma Elvira Shepard appears in many of the photos that I have received. She seems to have been the matriarch of the Shepard family in the early 20th century in Oklahoma, which would explain why she is so prominent in many of the photos. Next to Elvira, on the right, is my Grandmother Bura Davis Shepard (1896-1986), Elvira's daughter-in-law.

In the back in this photograph is a tall woman who is identified as Mrs. Erickson. She appears in a number of the photos that I have received. She must have been a close family friend or neighbor. If anyone can tell me about Mrs. Erickson and her place in our family's history, I would appreciate hearing from you.

If you do have comments to make about these photos, send me an email, or simply click on the comments button at the bottom of this page and you can leave a message. I would be glad to hear from you.
- - -
Steve Shepard

Mine eyes have seen the glory
of the coming of the Lord:
His truth is marching on.
~Battle Hymn of the Republic

Happy Birthday to Cindy A. Shepard! Today, February 2 is a memorable day in our Shepard Family history. Not just because it is groundhog day. Nor because it is the exact midpoint of winter. Not even because it is the birthday of my sister-in-law Cindy A.Shepard of Oak Harbor, Washington. All that makes it plenty memorable, of course. But the second day of February stands out for us Shepards because of two historic events that occurred on the same day in the lives of some kinfolk. One event was very happy and the other very tragic. 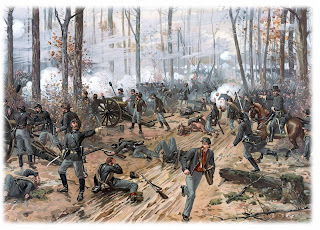 160 Years Ago Today. In February of 1862, my Great Great Grandfather William Sheppard was just a few months into his military service in the Civil War. He had joined the Union Army's 2nd Indiana Cavalry in September, 1861 while living in Wabash, Indiana. Over the following few months, after his military training, his unit marched southward from Indiana into Kentucky. At the town of Bowling Green, William's unit had their first taste of battle in a skirmish with confederate forces.

It was the very first conflict of the War for the 2nd Indiana Cavalry. This unit went on to fight in the war for 3 more years. They fought at the famous encounter at Shiloh. They went on to engage the enemy in other venues as well before returning to Wabash, Indiana at the end of the war.

Tragic Irony. While on the battlefield that fateful day in February 1862, young William could not have known what was happening back home in Indiana. The very day he was injured in Kentucky, his wife Mary in Wabash, Indiana, was giving birth to their second son. What tragic irony that these two events would happen on the same day, some 315 miles apart. 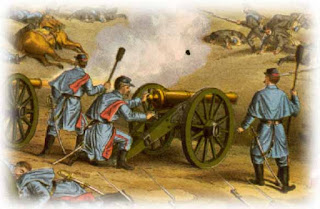 After suffering his injury, William was taken off the battle field and transported to a military hospital in Evansville, Indiana. 5 long months later, on July 22, 1862 he died. The actual cause of death was not the arm injury, but dysentery, an intestinal infection that took the life of countless soldiers who, like GGGranddad William, experienced extended stays in wartime hospitals.

The second day of February will always remain in our family history as a time when joy and tragedy intersected. In Indiana a baby was born; in Kentucky the baby's father was mortally wounded. It may have been her longing for her soldier-husband that caused Mary Shepard to name their newborn child William Elmer Shepard.

The Rest of the Story. That wartime baby William Elmer Shepard became a very important figure in our family history as a young adult. He left his troubled stepfamily in Indiana and journeyed alone to the Saint Louis area where he married, had two children, and then migrated with them to Oklahoma in the early years of the 20th century. Our ancestors suffered much in those tragic years of the Civil War. We are grateful for their fortitude and resilience, and are honored to be counted among their descendants.
- - -
Steve Shepard

Posted by Steve Shepard at 10:36 AM No comments: