In family life,
love is the oil that eases friction,
the cement that binds closer together,
and the music that brings harmony.
~Eva Burrows

Greetings on this weekend of Valentine's Day, a time to celebrate the joy of human love and the importance of love within our families.

I have been thinking a lot about 1980 recently. That was back before email, cell phones, and digital cameras. (How in the world did we get by?!) I am thinking a lot about that year because I have been scanning pictures from my photo archives from 1980, and my mind has been engrossed in remembering family events that took place.

It boggles my mind to realize that 1980 was 30 years ago! That year Ronald Reagan defeated Jimmy Carter to become president, HP announced the release of its first PC, the Iran hostage crisis took place, Mount St. Helen's erupted, John Lennon died, and Jeremy Ortiz was born.

William Shepard had been gone barely 3 years in 1980, and Bura (Davis) Shepard, who began the year at 83 years old, was still fairly healthy. She was living with family in San Diego but would relocate the next year to Anacortes, Washington for the last 5 years of her life. 1980 was just about half my life ago. That year I turned 32, which is the same age that our son Nathan is now, so for me it was just about a generation ago. 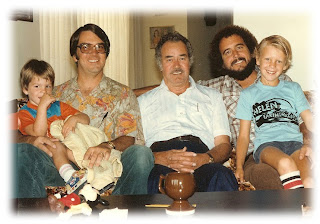 Virtually all of us Shepards lived in San Diego during what I like to call "the Golden Years" of Will and Bura's family: 1940's, 50's, 60's and even into the 70's. But by 1980 many in the family had moved away and and were living elsewhere in California or in other places like Washington State, Texas and New Mexico. Pauline (Shepard) Russell was their only child still residing in the San Diego area with her family. So 1980 was a year when our family was still very much in transition geographically.

The first picture I am including is from 1980 and shows a 59 year old Eugene Shepard (in the middle) with two of his sons (me on the left, Gary on the right) and the only two grandsons he had at the time (Nathan on the far left, Jason on the far right). It was taken in San Diego while Eugene and Maida were back visiting in Southern California after they had retired to Washington State in 1978. 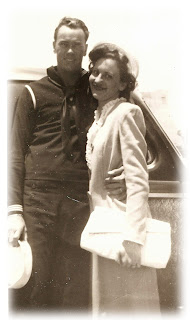 Of all the descendants of Will and Bura Shepard today, over half have been born since 1980, including most of their Ggrandchildren and all of their GGgrandchildren. This is just one indicator of how much our family has changed in the last 30 years. Thank God for the changes! Even though we have had to say goodbye to some wonderful family members, we can still be grateful for the newness that the last 30 years has brought. For new children who remind us all to safeguard the future. For new marriages that ensure the continuation of our family legacy. For new parents and grandparents who keep the memories and values of previous generations alive.

With all the changes in our family in the last 3 decades, one can only imagine how much our family will change in the next 3 decades. I hope to be around to see it happen.

The second picture shows love birds Maida and Gene Shepard back in 1944. This picture is part of a larger Valentine's Day photo display.

Select this link  to see this collection of family photos that celebrates love among us.
- - -
Steve
Posted by Steve Shepard at 3:19 AM