Family life is too intimate
to be preserved by the spirit of justice.
It can be sustained by a spirit of love
which goes beyond justice.
- Reinhold Niebuhr

Greeting from the snowy mountains of Northern California where Cindy and I happen to be on this day before Valentine's Day. May you be blessed with loved ones around you tomorrow on a special day that celebrates love -- that perfect remedy for the coldest winter weather.

I want to continue some thoughts I began last time regarding the Owens family to whom we are connected through Grandad's mother Elvira Owens (1864-1931). I have mentioned before that I correspond with Roberta Owens Brooks, a third cousin who is herself originally from Alton, Illinois (Grandad's birthplace) in Madison County. With her we share a common ancestry, through Edmond Owens, Jr. (1795-1864), who is Roberta's gg grandfather, and ggg grandfather to those of my generation.

Roberta has graciously shared with me valuable documentation regarding Edmond Owens. He was originally from South Carolina, but was living in Davidson County, Tennessee when he became one of the famous "Tennessee Volunteers" and served in the War of 1812, which began when Edmond was only 17 years old. That war lasted until 1815 and has been called "the second war of independence" against Great Britain.

Madison County history books say that the war veteran Edmond, his wife Anna Phelps, and their 6 children migrated in 1838 to Madison County, Illlinois, 300+ miles from their home in Tennessee. It was not until 15 years later, in 1853, that President Franklin Pierce signed a declaration giving Edmond an 80 acre land grant in Madison County, Illinois as a result of his military service 38 years earlier! (The wheels of government ground slowly EVEN then.) Hence the presence of the Owens family in Madison County, which continues to this day. The 5th of Edmond and Anna's 6 children was Payton Owens (1826-1872), the father of Elvira Owens, the mother of William Shepard (Grandad).

One of Edmond Owens' gg grandchildren is Dane Shepard, who will be hosting the Shepard family reunion this summer near Oklahoma City on July 18. He was kind enough to send me these details about the event:

The reunion will be held in the small town of Newcastle, Oklahoma off Interstate 44, 25 minutes south of the Will Rogers World Airport. Reunion facility: Newcastle Community Center, 1221 N. Main St., Newcastle, OK 73065. Date and time: Saturday, July 18, noon to 5 p.m. 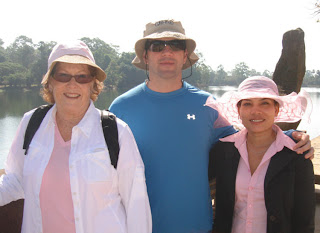 The second photo is a picture of one of Edmond Owens' ggg grandchildren, Nathan Shepard of San Francisco. Nate's fiance Chenda Sou is on the right, and his mother, (my favorite valentine) Cindy Shepard is on the left.

This picture was taken last month near the world famous 12th century temples of Angkor Wat near Siem Reap, Cambodia. We were visiting Chenda there in her home country, where she presently lives until she is able to get her visa to come to the US.
--
Steve
Posted by Steve Shepard at 8:00 AM

Hi Steve - My name is Bonnie Owens, & I am Roberta Brooks' 1st cousin, once removed. Her father Herbert & my grandfather Willard were brothers. I also have an "Owens Family Tree" on ancestry.com, & Roberta & I are guests on each other's trees. She came to Illinois a couple of years ago, & we met. I'm in the final edit phase of my tree, & am working on publishing hard copies for my family. I'm interested in your history with this family; I guess we are related, as well. My email address is bonnieowens@wideopenwest.com. Thanks. Bonnie Owens, Naperville, Illinois