Our family is a circle of love and strength.
With every birth and every union, the circle grows.
Every joy shared adds more love.
Every obstacle faced together
makes the circle stronger.
-author unknown

Greeting from beautiful San Diego to all of you who find yourselves within "our circle of love and strength." Spring hit us hard this past week with some 100 degree weather, but it didn't last long. And as often happens, today is cool and very pleasant.

These weekly emails are focused on the lives of William Shepard and Bura Davis Shepard, as well as their family and friends. So these messages have what seems like a fairly narrow focus. After all, Will and Bura are just part of the family tree of each one of us. For me, since they are just two of my four grandparents, they are half of my entire family tree. However, for the youngest ones in our family, since Will and Bura are just 2 of their 16 GGgrandparents, they represent only 1/8 of their family tree!

When you add in Gram's Davis siblings and their families, and Grandad's sister's (Sadie Shepard Pruett's) children and their families, you can see that our larger family tree is something that encompasses probably hundreds of people today. By the way, with so many of these folks living in the middle part of the country, we hope to see some of them at the July reunion in Oklahoma.

Remembrances. This coming Tuesday we remember the life of Eugene William Shepard on what would have been his 88th birthday. It was 6 years ago this summer that Dad died in Anacortes, Washington. His father, William Shepard (who was born in 1888), died at almost exactly 88 years old. Gene and Maida raised their 6 children in San Diego, but most of their family now live in and around Anacortes, Washington. 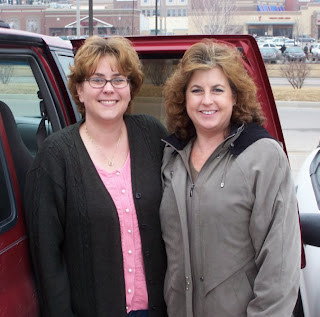 This coming Monday we remember the life of Beverly Russell on what would have been her 70th birthday. She died way too young at the age of 33 in San Diego of an unexpected brain aneurysm. Bev's daughter is Shannon Wilk who lives in Atchison, Kansas with her young daughter Emma Beverly Jean Wilk. The first picture I am including was taken last year and shows Shannon with Kim Clark. Both of them live not far from Kansas City, Missouri - Shannon about an hour's drive North, and Kim about a half hour's drive East.

Shannon's uncle (and Beverly's older brother) is Rex Russell who now lives in Nevada. Rex and Beverly are the first two grandchildren of Will and Bura Shepard, and their only grandchildren born in Colorado before the family moved to San Diego in 1940.

Most of us had not been in contact with Rex for quite a few years. I contacted him recently after getting his phone number from my aunt Thelma of Gallup, New Mexico. She had quite serendipitously received it from an old friend in San Diego. Rex and I had a wonderful conversation when we talked. He is doing well and living in Red Rock, Nevada, north of Reno, on a remote 10 acres, "17 miles from the nearest gas station," he said. He moved to Nevada a few years ago from Southern California and is now retired. He lives next to his son Eric and Eric's wife Ruth and their three horses and other ranch animals. Rex does not have a computer, but Eric and Ruth do, so they are now part of our online family circle. 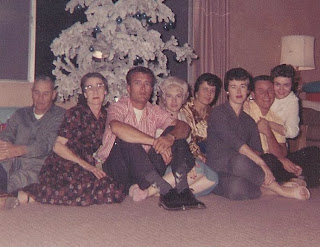 The second picture I am including is and oldie from Christmas 1960 and shows several members of our family at the Russell home on Mandalay Place in San Diego. From left to right in the picture are: Will and Bura Shepard, then Rex Russell with his first wife Ellen, next to his mother Pauline Shepard Russell. Next to Pauline is Thelma and Terry Boyd with their 21 year old niece Beverly Russell on the far right.

Our family reunion in Newcastle, Oklahoma this summer is less than 3 months away! Be sure and make your plans and join us for this celebration of our "circle of love and strength".
--
Steve

Posted by Steve Shepard at 9:00 AM