Whatever we think of the past,
we must not be prisoners to it.President Obama
June, 2009

Greetings to all of you on this fine spring day. In last week's post I mentioned that we cannot change the past, but the past can change us, in the best possible way. Akin to that idea is the one quoted above from President Obama's speech last week in Egypt. In it he warned of being prisoners to the past, by letting the past keep us from positive change. He was speaking in particular about American/Muslim relationships. But this thought also relates to our family's history.

I love studying our family, learning about our ancestors, trying to understand the decisions they made, the loyalties they formed, the love of family they showed, the faith they affirmed, the varied approaches they took to life, and the ways they responded to adversity. But in all my learning (and my memories) about family who have preceded us, I realize that there were some attitudes and approaches to life that we must not emulate.

Did you know that there are many black Americans, especially in the south, with the last name of "Shepard"? And even more with the last name of "Davis", and some with other names within our family tree. My guess is that they did not bring those names to America with them. They have those names because they received them from some slave owners named Shepard or Davis in early 19th century America, in a time when owning slaves was a common, accepted practice, and perfectly legal. (I do not know if it was our particular Shepard or Davis ancestors -- or relatives with other last names -- who were slave owners, but it is possible. Perhaps in time, after more research, we will find out.)

Obviously over time slavery has become unacceptable to people in our country and in our family. We refuse to be prisoners to our past by maintaining old attitudes about slavery in particular, or negative attitudes about Americans of color in general. The fact that we have a black president is only one indication of this. Times change. Sometimes for the better! The attitudes of our family members have evolved over the years in regard to the diversity among our fellow Americans. And it has happened because we have been careful not to be imprisoned by our past.

To take this point a bit further, attitudes among the different age groups within our our own family members continue to change. In many ways those of my generation approach life quite differently from many of our ancestors. Yet I can already see that among family members younger than me, there are even more attitude changes. I am grateful for ways that the younger members of our family resist being prisoners of their past, and are open to the future just as much, or even more, 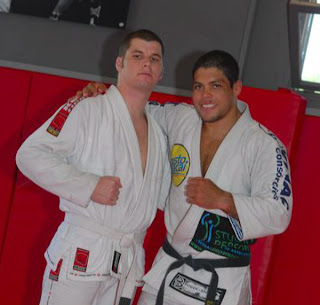 than we who precede them. I marvel at this wonderful flow of history, of which our family is one small but very important part.

Happy Birthday Scott Ortiz! Tomorrow, June 13, is the birthday of Scott Ortiz, who is the 11th Ggrandchild of Will and Bura Shepard, the younger son of Kim Clark, and grandson of Thelma and Terry Boyd. He moved to Blue Springs, Missouri a few months ago from San Diego and works in nearby Kansas City. His mom Kim tells me that he has practiced Jiu Jitsu (a type of martial arts) for several years and also enjoys boating and looks forward to going to the lake this summer. The first picture is of Scott (on the left) with Jiu Jitsu Brazilian World Champion Andre Galvao.

Scott was the last of Will and Bura's descendants to be born before the death of Bura Shepard in 1986. This means that 17 of the 44 descendants of Will and Bura have been born since they both died. When you consider that those born just prior to Bura's death were babies when she died, it is clear that 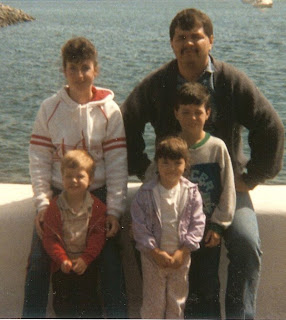 nearly half of our entire family today never knew Will or Bura personally. The only thing they know about those wonderful two people is what we tell them. And there is a lot of good to tell!

The second picture I am including was taken in 1988 and shows Scott Ortiz in the bottom left in front of his mother Kim Clark. Also in the picture are Scott's older brother and sister Jeremy and Amanda, and his father Gabe Ortiz who passed away in 2002.

Remember our family reunion next month on July 18 in Newcastle, Oklahoma. At the reunion, there will be a table set up for any old or new family photos you might like to bring for people to see.

Our host Dane Shepard needs to tell the caterer by June 27 how many to feed, so please email Dane at dcflock@juno.com or email Kim Clark at jlcklc07@comcast.net and let one of them know by June 26 if you will be attending. We want to make sure there is enough food to feed everyone!
--
Steve
Posted by Steve Shepard at 8:30 AM