Greeting from our home in San Diego where Cindy and I find ourselves on this weekend of Labor Day, when most of don't do much "labor" at all.

This coming Wednesday, September 9, is my turn to celebrate a birthday! The unique date 090909 suggests to many people oneness, a sense of being connected to each other and to our world. In the midst of all the strife and dissension in the world around us, that suggestion seems very attractive. For that reason many people around our world are celebrating next Wednesday as World Day of Interconnectedness. Seems to me -- especially with our interest in our "interconnectedness" as family -- that would be a great way to approach this coming Wednesday. Or any day for that matter.

The first picture I am including is an old one and illustrates interconnectedness, at least as it relates to our family. Taken in the spring of 1983 in Los Alamitos, California, it is yet another multi-generational picture which our family has been fond of over the years. It shows Bura (Davis) Shepard in the middle, and her second son Eugene Shepard on the right. On the left is me (Eugene's second son) and then our son Nathan holding an airplane. This picture was taken on his 6th birthday. 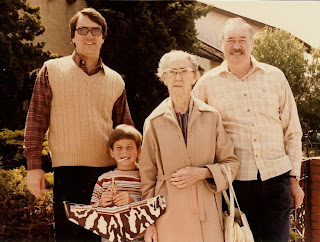 I mentioned last week that the story of the our family cannot be fully told apart from our Church connections. I'd like to go a step further and say something about my particular place in that picture. With it being my week to celebrate a birthday, I hope you will indulge me this bit of autobiography.

In time my faith and religious understanding evolved to the point where I felt the need to become a minister in the Disciples of Christ, a more progressive and open minded fellowship. It was a decision I did not come by easily. The Disciples are the ecclesiastical cousins of the Church of Christ, toward the "left" side of the religious spectrum. Yet they share many similarities in practice, including believer's baptism by immersion, weekly communion, and congregational autonomy. And they are both part of the Stone-Campbell tradition, a religious movement that began in early America. As I mentioned last week, our family has roots in that particular heritage that go back nearly 150 years.

I still remember that evening 30 years ago when I told my Grandmother Bura (Davis) Shepard that I had become a minister of the Christian Church (Disciples of Christ). She was the religious matriarch of our family and bore the torch of loyalty to the Church of Christ better than anyone else. Many in our larger family had gathered during the Christmas holidays at the home of cousin Phil Wilk, with whom Gram was living at the time, in Lakeside just outside San Diego.

It was a time of transition for our family. Grandad Will Shepard had died at the age of 88 just a couple of years earlier. And Phil's young wife Beverly had tragically died just a few year's before that, leaving Phil with two small children, Karl and Shannon. The adjustment to Bev's death was made more difficult for some by Phil's choice of a man to be his life partner. Sometime during the evening Gram and I had a moment together. I swallowed hard and told her that I had become a minister of a Christian Church. Her response was simple but to the point: "I can't go for that." More than anything else, I understood that to be a reflection of her 80+ years of unwavering loyalty to the Church of Christ.

Fortunately, the relationship she and I shared was strong enough that my decision to wander away from the Church of Christ fold was not an obstacle to our life together. Even though Gram was thoroughly devoted to the Church of Christ, she cared deeply for all her family, regardless of their life decisions. "Blood is thicker than water" is an old proverb suggesting that family ties are strangely stronger that just about any other relationship in life. 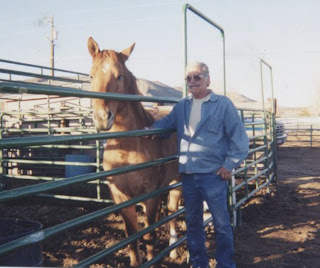 And to our credit, I have found that to be true in our family, thanks in large part to her generous and loving spirit. And when you think about it, isn't that what "interconnectedness" means?

Red Rock's Roper Rider Rex Russell. The second picture I am including shows cousin Rex Russell of Red Rock, Nevada, with his horse Roper. Eric and Ruth, Rex's son and daughter-in-law, also of Red Rock, sent this picture to me recently to share with all of you.

Rex is the first child of Bill and Pauline (Shepard) Russell, and is the first grandchild of Will and Bura Shepard. It is hard to believe that the cowboy in this picture was raised a city boy in San Diego! To be sure, he was born in a very small town in southeast Colorado, but his family moved to Southern California in 1940 when he was a young child. Though Roper is his pride and joy, Rex can also be found occasionally racing his souped up black Camaro on the Fallon Raceway. Eric and Ruth shared with me that Rex spent some time in the hospital earlier this summer with pneumonia, but the last word I received is that he is doing much better now, and is back in the saddle again.

For the next couple of weeks Cindy and I will be out of the country, and I may have some trouble accessing or sending email. If you don't hear from me, just check our family blog at TheShepardsCrook.com each Friday for a family update.
--
Steve
Posted by Steve Shepard at 3:00 AM