Family life is full of ups and downs,
success and failure
and all kinds of characters...
It's difficult to imagine
anything more nourishing to the soul.
Thomas More

Greetings on Ground Hog Day! If you are a pessimist, today is the very depths of mid-winter. For optimists, today is a sign that we are half way to spring!

Rex Russell (1936-2011) I received word recently that my cousin Rex Russell suffered a heart attack and passed away last Tuesday, January 25. For the last 12 years he had lived in Red Rock, Nevada next door to Eric and Ruth Russell, his son and daughter-in-law. Rex would have been 75 this May. Our prayers and best wishes are with Eric and Ruth in this time of loss. 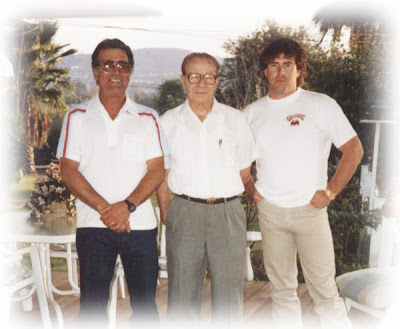 Rex was the first child of Bill and Pauline (Shepard) Russell, the first grandchild of William and Bura (Davis) Shepard, and the first Great grandchild of James Brooks and Caroline Davis. (See 1989 picture of Rex with his father Bill and son Eric, taken at Rex and Margie's home in Lakeside, California.)

Rex and his sister Beverly were the only ones among the 12 grandchildren of Will and Bura to be born in Colorado. They were small children when the family migrated to Southern California in 1940. Rex is the first of Will and Bura's grandchildren to pass away as an older adult. Two of their grandchildren -- Linda and Beverly -- died as young people.

Rex was raised in San Diego, graduated from San Diego High School, and retired from San Diego Gas and Electric Company. In 1959 he married Ellen Lane with whom he had one son, Eric. In the late 1990s, after his second wife Margie died, Rex moved from Southern California to Red Rock, Nevada. 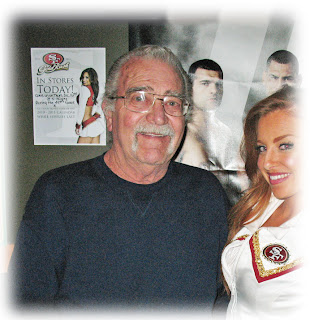 He spent some of his summers as a youth visiting family in Oklahoma. I received an email from Larry Davis a while back regarding one such visit. (Larry was born the same year as Rex, and is a first cousin of Rex's mom Pauline Shepard.) Larry: "I remember Rex when I was probably in the 7th Grade. Rex came to Oklahoma as a teenager in the early 1950's. I am not sure but I believe Rex Russell and Lyndel Jenkins blew up the entire Oklahoma panhandle with fire crackers during the week Rex came to visit us."

Rex was a fun loving guy, and quite an outdoors man. One of his favorite places was Kaibab, Arizona, where his ashes will be scattered. In recent years he also loved living in the boondocks of Red Rock, Nevada near Eric and Ruth, racing his Camaro occasionally, and riding his horse Roper. (See recent picture of Rex above, taken this past December with a San Francisco 49er Cheerleader. Click here to see more pictures of Rex and his family over the years.) 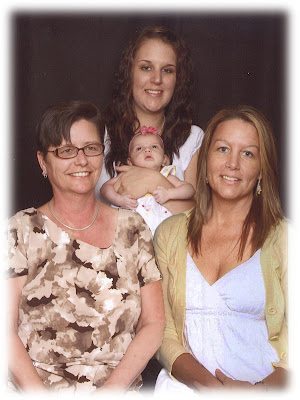 "Gary and I have been staying busy but doing well. The weather up here has been pretty wet so we haven’t really gotten to do much outside. Gary’s been preaching quite a bit at our church lately and I really enjoy listening to him. I am attaching a 4 generation picture of my side of the family which is a milestone. It has been close to, if not a little more than, 40 years since 4 generations have been alive at the same time in my family."

The picture above was taken last summer and shows Cindy on the left with her daughter Samantha on the right, her granddaughter Breauna at the top, and her 8 month old Ggranddaughter Janaeya in the middle.

Special Note Regarding Email Addresses. On a few occasions recently I have had some of you request the email address of family members. I want to remind you that the emails I send out do not show the addresses of every one on my mailing list. But I am always glad to share an email address with any family member who requests one from me.
- - -
Steve
Posted by Steve Shepard at 9:37 AM