It is a desirable thing
to be well-descended,
but the glory belongs
to our ancestors.
-Plutarch

Greetings to all of you from San Diego where fall has finally decided to arrive with cool nights and overcast skies.

Update on New Headstone Project. Second cousin Jerry Davis contacted me this past week and was excited to tell me that we are getting close to the total we need to purchase a new headstone for our ancestors Alexander and Elizabeth Davis. 12 different descendants of theirs have so far contributed toward the effort, leaving us only $164 short. Please let Jerry (jerthebear@sbcglobal.net) or me know if you can help us complete this project. We are hoping to raise the necessary amount soon.

As I have mentioned before, the new headstone is to replace the broken and unreadable stones that now exist for Alexander Davis (1819-1866) and his daughter Elizabeth Davis Carter (1844-1867) in Spencer, Indiana. Elizabeth died the year after her father, at just 24 years old, and is buried next to him.

Alexander and his wife Jane Buskirk Davis (who is buried in Helena, Oklahoma) were important pioneer ancestors of ours who migrated westward from Ohio to Indiana in the early 19th century and began a period of several generations when our family lived in the area around Spencer, Indiana. They are also the very first ones among our ancestors to belong to the Campbell/Stone religious movement (The Church of Christ, Christian Church, Disciples of Christ). 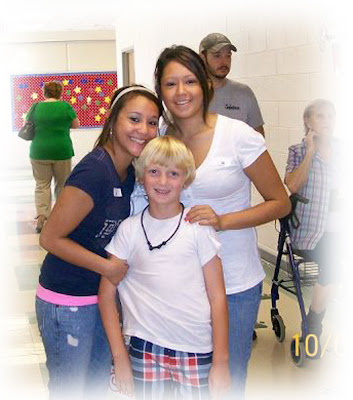 Very few of our relatives still live in Spencer today, but it remains a special place in the history of our family. Especially important is the New Union Cemetery northwest of town, where Alexander and Elizabeth, and a number of other ancestors, are buried. Next to the cemetery is a grassy area where the old New Union Church of Christ stood for nearly 100 years until 1957. We are indebted to these folks for their pioneering spirit, their enduring faith and their love of family. Their legacy continues through us and is present in many ways in their descendants who remember them even today.

Happy Birthday Mandi! One of their many descendants is Mandi Aquiningoc of Granbury, Texas. Tomorrow is Mandi's 19th birthday. She is also a descendant of Leroy and Nola (Shannon) Gower. For the first half of Mandi's life she lived in San Diego, where she was born in 1992. The last 10 years or so she has lived in Texas. The first picture shows Mandi (on the right) with her older sister Lyndsey and her cousin Kyle Sauvage. The picture below shows Mandy with her dog Bubbers. 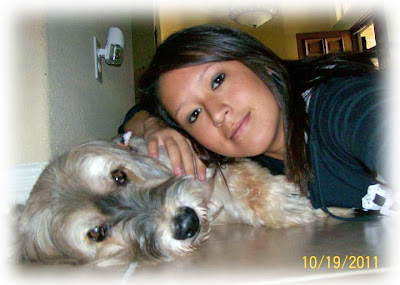 Mandi: "Hi uncle Steve, it's so good to hear from you:) I'm doing great! I finally got a job at panda express here in Granbury and its amazing. I love the job I love the people and I think I'm gonna fit right in:) My sister and I moved in with our grandparents in Granbury which was the best thing for us to do. Life's great uncle Steve, and I'm proud to say that! Hopefully me and my sister can make it out there sometime and visit with the rest of our family."

Here is Mandi's lineage from Alexander and Jane Davis:
- - -
Steve