There is nothing in all the earth
that you and I can do for the Dead...
They do not need us,
but forever and forever more
we need them.
~President James Garfield

Greetings to all of you, wherever you may be, from San Diego California on this President's Day holiday. 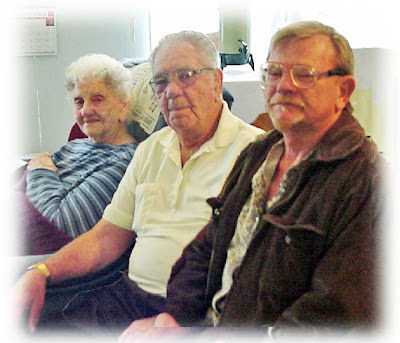 Yesterday was the birthday of my cousin Hershell Gower, the oldest grandchild of Leroy and Nola Shannon Gower.

His parents are the late Hendrix Gower and Starlene Bass Gower. Of my 6 cousins on the Gower side of the family, Hershell is the first born. He came along during the second World War, just about a year after the first of the Gowers moved to San Diego from Oklahoma, a move that took place in 1942.

I have not been in touch with Hersh much in many years, so I was pleased to run into his son Shaun on Facebook recently and get his father's phone number. In a phone conversation with Hersh the other day, he told me that he has lived in Bullhead City, Arizona for about 3 years now. He keeps busy working a few jobs each week and enjoys the warm dry weather of Arizona and the laid back lifestyle with his wife Shelly. 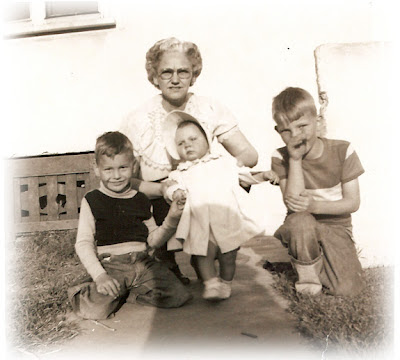 The first picture (above) shows Hershell at 60 years old on the right with his father Hank Gower in the middle and his grand mother Nola Shannon Gower on the left. This picture was taken in 2003 on the occasion of Nola Gower's 100th birthday celebration in Anacortes, Washington. How often does a 60 year old have the opportunity to celebrate with their GRANDmother on her birthday?

The second picture was taken in San Diego in 1951 and shows a young Hershell on the right with his young grandmother Nola Gower. The other two in this picture are also grandchildren of Nola Gower: my brother Gary Shepard is on the left; my sister Linda Shepard is the baby in the middle.

Today, February 20, is the birthday of my uncle Terry Boyd of Gallup, New Mexico. He has been a member of our family ever since he and my aunt Thelma Shepard were married back in 1958. After a number of years living in San Diego, they moved to Gallup, New Mexico where they live today. 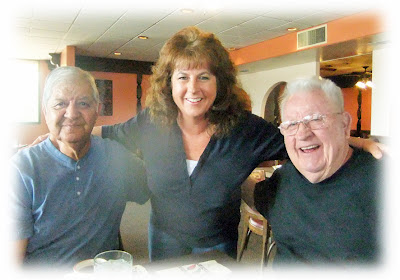 Thelma tells me that Terry is dealing with a number of health concerns these days, including diabetes and C.O.P.D., as well as the need for knee replacement surgery. They are going back and forth from Gallup to the V.A. in Albuquerque for his various treatments and doctor's appointments. Terry's daughter Kim Clark tells me that Terry can't walk too well so they don't get out much, but he is feeling a lot better since they got 60 lbs of fluid off of him. In other news from Kim's part of the family, she tells me that her daughter-in-law Desiree is feeling a little better. She is now 5 months pregnant with their twins, who are still doing just fine and growing as they should.

The third picture shows Terry Boyd on the right, with his daughter Kim Clark in the middle, and Kim's father-in-law Gabriel Ortiz on the left. Thanks to Kim for this picture which was taken in April, 2011.
- - -
Steve
Posted by Steve Shepard at 9:17 AM