A Faith That Lived In Grandmother, November 6, 2015

I am reminded of your sincere faith,
a faith that lived first in your grandmother.
~ The Apostle Paul

Bura Davis Shepard (1896-1986). This Sunday, November 8, is the anniversary of the birth of a person who has been gone for several decades now, but who was a dynamic force in our Shepard family for many years, my paternal grandmother Bura Davis Shepard. She was born 119 years ago this weekend outside Spencer, Indiana to Callie Spear Davis and her husband James Brooks Davis. She is the connection to our many Davis ancestors and relatives around the country, but especially in Oklahoma. 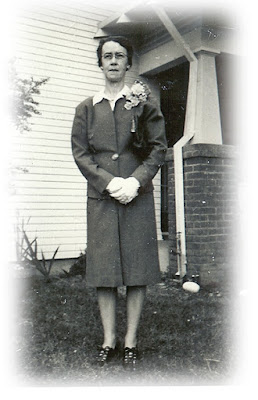 She was the standard bearer for our Shepard family's strong connection to the Church of Christ for nearly her entire life. She was part of a strong family tradition of Church of Christ people that can be traced to her Great Grandparents Alex and Jane Buskirk Davis who were from Eastern Ohio in the early years of the 19th century.

Her husband, my Granddad William Shepard, was also a long time member of the Church of Christ, but I always had the impression it was as a concession to her. Her commitment to the church was the dynamic force that moved through our family in a most powerful way. 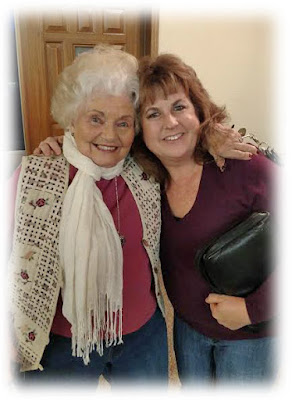 Our Davis relatives today continue to be a source of kinship that has existed for generations. I was reunited recently with a long time family friend here in San Diego by the name of Richard Indermill. He is related by virtue of two of his uncles (Barney and William Kilpatrick), who married two of Bura Davis' sisters (Winona and Myra Davis). Even though these marriages occurred nearly 100 years ago, the bond that was created has importance even to this day.

I received word from my cousin Kim Boyd Clark recently that she discovered a relative in Missouri who she never even knew existed: Norma Lou Kilpatrick Allen of Springfield, Missouri, a long time reader of The Shepard's Crook. Turns out Norma Lou is a daughter of Barney Kilpatrick and Winona Davis Kilpatrick. Winona was the sister of Kim's Grandmother Bura Davis Shepard. (Winona is also the aunt of the aforementioned Richard Indermill.) Here is a picture that Kim sent me a few days ago, taken on the occasion of Kim and Norma Lou's happy meeting recently and the celebration of their kinship.

Many of us, Kim and myself included, can relate to the story of Timothy in the New Testament of the Bible. Timothy's life was influenced greatly by the faith of his grandmother. It was an impact that the Apostle Paul considered so important that he mentioned it in one of his letters that is now included among the books of the Bible. "I am reminded of your sincere faith, a faith that lived first in your grandmother Lois and your mother Eunice and now, I am sure, lives in you." (2 Timothy 1.5) 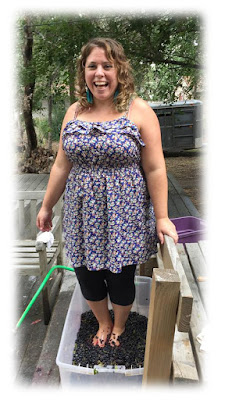 Surely all my Shepard cousins echo my sentiments that Grandmother Bura was a remarkable woman whose positive impact on our lives is felt still. God bless her memory as we remember this anniversary of her birth and as we celebrate her positive influence in our lives.

Fall means many things to many people. To Havilah it means grape stomping, as can be seen in this picture of Havilah taken last month. 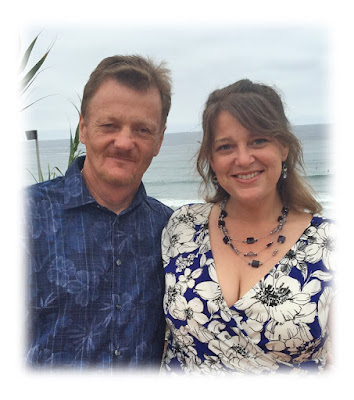 Happy Birthday, Shaun. This Sunday, November 8, is also the birthday of Shaun Gower, the older son of my cousin Hershell Gower. Sean is the first of the Great Grandchildren of Leroy and Nola Shannon Gower. Born in England while his father Hershell was in the service, Sean and his wife Tracy live today in Escondido, California.

Along with his brother Lloyd Gower, Sean has lived in the San Diego area nearly his entire life, as long as almost any of our Gower family members. This final picture shows Sean and his wife Tracy on the occasion of their wedding this past summer in Del Mar, California.
- - -
Steve Shepard

Posted by Steve Shepard at 8:18 PM