Memories, even bittersweet ones,
are better than nothing.
~Jennifer Armentrout

Remembering Caroline Spear Davis (1865-1951). Today is the 151st anniversary of the birth of Caroline Spear Davis of Owen County, Indiana. She is the mother of my Grandmother Bura Davis Shepard (1896-1986). Her 85 years spanned a amazing time in history, from the American Civil War to the post WWII years.

The 6 image composite, below on the right, shows Callie at 6 different stages of her life. Across the top are three images from the time when she lived in Indiana: in about 1880 as a young woman, in 1896 as a 30 year old bride, and then in 1908 as a mother of 7 children. Across the bottom are three images from when she lived in Oklahoma: in 1922 as a Grandmother with one of her grandchildren Bernard Kilpatrick; in 1936 as a Great Grandmother with one of her great grandchildren Rex Russell; and in 1947 just a few years before the end of her life.

Caroline (or "Callie" as she was known) is our connection to our Spear family roots, an interesting and very significant part of our family heritage. Callie's Great Grandfather James Spear (1768-1821) migrated to America from Ireland as a young man, and eventually settled in Eastern Ohio. Like our Davis ancestors (and countless other pioneering families), the Spears came from Eastern Ohio to Indiana in the 1850s. My GGG Grandparents Alexander and Jane Davis came from Ohio's Monroe County, while the widow Julian Pugh Spear (Callie's grandmother) came with her grown children from Ohio's Tuscarawas County. The Spears and the Davises settled about the same time in Morgan Township near Spencer, Indiana in the years just before the Civil War. 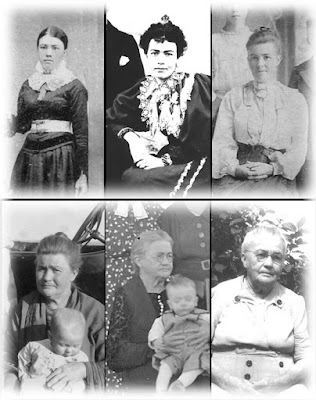 Whether the Spears and the Davises knew each other in Ohio before moving westward is unknown. We do know that both families settled very near each other in Indiana, and that both families were instrumental in establishing a small country church near Spencer, Indiana, the New Union Church of Christ. This suggests that when they migrated westward the Spears and the Davises brought with them their common church affiliation.

In Eastern Ohio in the mid-19th century, the most rapidly growing religious group was the Campbell-Stone Movement (aka the "Restoration Movement") which gave rise to the Churches of Christ, the Christian Church, and the Disciples of Christ. One curious historical tidbit I found shows that Andrew Spear (1806-1887), the brother of Callie's Grandfather Samuel Spear, is buried in the "Church of Christ Cemetery" in Washington County in Eastern Ohio. It is just one more indication that Callie Spear Davis' kinfolk in Ohio were Restoration Movement people. This suggests that our family's roots in the Campbell-Stone tradition in America go back to the early 19th century, and the very beginning of the Campbell-Stone tradition.

Another interesting bit of family history relating to Callie Spear Davis is the existence of an obscure little book by A.T. DeGroot titled "The Churches of Christ in Owen County, Indiana," published in 1935. In that book the author writes about the New Union Church of Christ (also called "the Christian Church at Union"), the congregation to which Callie Spear and her family belonged. It is also the congregation to which many family members of her husband James Davis belonged.

DeGroot's book contains numerous membership records from the period between 1866 and 1880. In those membership records are 11 people named Davis, and 28 people named Spear, most of them identifiable as kinfolk of ours. When Callie Spear married James Davis in 1896, it was the union of two church members whose families were founding members of the same small congregation in their rural community. The New Union Church was a viable congregation for 100 years until it closed in the fall of 1956. 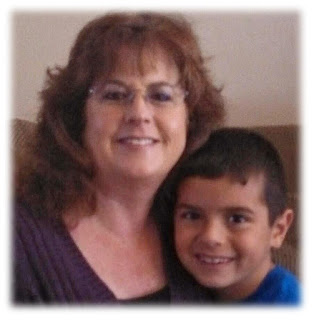 In 1913 Callie Spear Davis and her husband James Brooks Davis moved from Indiana and settled in Beaver County, Oklahoma with their 7 children. Callie and James lived the last years of their lives there and are buried in the Sophia Cemetery in Beaver County.

Happy Birthday Kim and Damian. Today is also the birthday of one of Callie Spear Davis' Great Grandaughters, my cousin Kim Boyd Clark. Kim is the daughter of my aunt Thelma Shepard Boyd. She and husband Jeff Clark live in Grain Valley, Missouri.

Today also happens to be the birthday of Kim's grandson Damian Ortiz of San Diego. Damian is the son of Kim's son Jeremy Ortiz and his wife Desiree of El Cajon, California. Best wishes and happy birthday to Kim and Damian!

Thanks to Damian's mom Desiree for this picture of Kim and grandson Damian.
- - -
Steve Shepard

Posted by Steve Shepard at 8:27 AM