The Last Will and Testament of James Sheppard, Sr., September 12, 2017

Knowledge of our ancestors
shapes us and instills within us
values that give direction
and meaning to our lives.
~D. B. Neuenschwander

Birthday Wishes to Kelly Sauvage. Today is the birthday of my niece Kelly Shepard Sauvage, younger daughter of my brother Gary Shepard. Born and raised in San Diego, she and husband James Sauvage live today in Weatherford, Texas, with their sons Nate and Kyle. 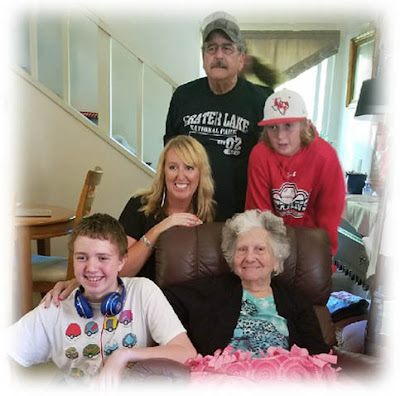 In July, Kelly, Nate and Kyle visited some of their family in Anacortes, Washington. The first picture shows Kelly in the center with her father Gary at the top, her son Kyle on the right, son Nate bottom left, and Kelly's grandmother Maida Shepard on the bottom right. This picture was taken at Maida's home on Wildwood Lane in Anacortes. Best wishes to Kelly for a very happy birthday today!


The Last Will And Testament of James Sheppard, Sr. In the last couple of posts I have been sharing new stories about our Shepard ancestors from Indiana, Ohio, and Maryland. The most impressive and interesting historical family document I have recently encountered is the will of my 4X Great Grandfather James Cross Sheppard Sr. (His Great Grandson William Elmer Shepard (1862-1915) is the one who dropped one of the "p's" from his last name.)

James Sheppard (1775-1843) and his wife Hannah Gatchell (1781-1839) were married in Cecil County, Maryland in 1798. With the first 4 of their 13 children they migrated in 1809 to the frontier community of Kirkwood in Belmont County, Ohio. The timing must have been right for them to settle in Ohio, for over the following 30 years this Sheppard family made a very good life for themselves along the Cumberland Trail on the Eastern Ohio frontier. Historically we know that this was a prosperous time for Americans as our nation expanded westward.

A Treasure Trove of Information. Much of what we know about the life, the children and the wealth of James and Hannah Sheppard, is contained in James' will, which was written in 1840 and can be found in the County Records of Belmont County, Ohio. A copy of the text of James Sheppard's will is found at the bottom of this post. It is a fascinating document, which not only gives monetary details but also refers to other items and descriptions of historical interest.

James' wife Hannah died in 1839, an event which must have left him pondering his own mortality and the future well being of their 13 children. They ranged in age from 39 years old (Nathan Sheppard) to just 11 years old (George Washington Sheppard). When he wrote his will, James was 65 years old and had recently married for a second time to a woman named Esther Reynolds.

James lived only 3 more years after writing his will. But at 68 years old he lived far beyond the life expectancy for men in that time. Sadly, two of his youngest sons died the year after he did, Job at 20 years old, and Emanuel at just 17.

In his will, James bequeathed to his heirs cash gifts that totaled $5,150. That may not seem like much today, but in 2017 dollars it would be roughly equivalent to $150,000! And that was just the cash disbursements. It did not include "the home farm," another farm of 153 acres, a 10 acre sawmill, and a few other personal items that were mentioned in the will. 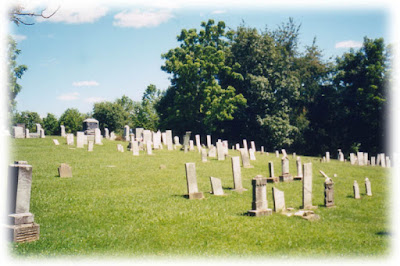 Outstanding Citizens of Belmont County. From these few details we can see that James and Hannah were well off. Whatever the total value of their estate might have been, it was sizeable, probably several hundred thousand dollars (in 1840 dollars!). In those early years of the 19th century, James and Hannah and their 13 children did remarkably well for themselves as outstanding citizens of the Kirkwood Township of Belmont County, Ohio.

There is a Shephard Road located in the South Eastern part of Kirkwood Township today. Could that road have been named after the James and Hannah Sheppard family, who were prominent members of that community 200 years ago?

When thinking about the descendants of James and Hannah over the past two centuries, I doubt if any of them have done any better financially than those Sheppards in the pre-Civil War years in Eastern Ohio. Not in Indiana, where some Shepards settled and did quite well. Not in Illinois, not in Oklahoma, not in Colorado, and maybe not even in San Diego or elsewhere in recent years. This is not to diminish the accomplishments of any of James and Hannah's descendants. It is simply to say that Hannah and James Sheppard Sr. and their large family did remarkably well in building a very good life for themselves on the American frontier. We can consider it an honor to be counted among their descendants.

The picture above shows Salem Cemetery where James and Hannah and several members of their family are buried. It is located in the little town of Hendrysburg, which lies alongside I-70 in Kirkwood Township, Belmont County, in Eastern Ohio.
- - -
Steve Shepard

I, JAMES SHEPPARD, of the County of Belmont in the State of Ohio, do make and publish this my last will and testament in the manner and form following, that is to say;

FIRST, It is my will that my funeral expenses and all my just debts be fully paid.

SECOND, I give, devise and bequeath to my beloved wife ESTHER SHEPPARD, in lieu of her dower, the one-third part of the home farm on which we now reside, so long as she remains my widow, together with all the property she fetched with her at the time of our marriage, and also fifty dollars in money.

THIRD, I give and devise to my eldest son NATHAN SHEPPARD five hundred dollars.

FOURTH, I give and devise to my second son JOHN SHEPPARD one note of hand I hold on him the amount of which is three hundred dollars.

FIFTH, I give and devise to my third son WILLIAM SHEPPARD two notes of hand which I hold on him amounting to six hundred dollars.

SIXTH, I give and devise to my fourth son JAMES SHEPPARD one note of hand I hold on him the amount of which is two hundred and fifty dollars.

SEVENTH, I give and devise to my fifth son SAMUEL SHEPPARD one note of hand which I hold on him calling for two hundred dollars.

EIGHTH, I give and devise to my sixth son ISAAC SHEPPARD one note of hand which I hold on him calling for two hundred dollars.

NINTH, I give and devise to my seventh son AMOS SHEPPARD two notes of hand which I hold on him calling for one hundred and ninety nine dollars and ninety eight cents.

TENTH, I give and devise to my sons JOB and EMANUEL SHEPPARD the farm on which I now reside, it being the southeast quarter of Section twenth-three, Township nine, Range six and to their heirs and assigns forever, the same to be equally divided between them and it is also my will that each of them have four hundred dollars paid to them by my executors.

ELEVENTH, I give and devise to my son GEORGE SHEPPARD the farm I purchased of WILLIAM B. BEALL, situated in Belmont Co., Ohio containing about fifty-three acres, it being a part of the northwest quarter of Section number 15, Township nine, Range six and to his heirs and assigns forever. It is also my will that he shall have eight hundred dollars in money, the money to be put to interest until he shall arrive to the age of twenty-one years.

TWELFTH, I give and devise to my daughter Elizabeth Mumma, in addition to what she has already had of me, the sum of two hundred dollars in money and one double cover lid.

THIRTEENTH, I give and devise to my daughter MARY SHEPPARD, in addition to what she already had of me, the sum of two hundred and fifty dollars in money and one side saddle and double cover lid.

FOURTEENTH, I give and devise to my grandson ISSAC EVANS one hundred dollars, the money to be paid to his guardian by my executor and by him put to interest until my grandson comes to the age of twenty-one years.

FIFTEENTH, I give and devise to my granddaughter SALLY ANN EVANS one hundred dollars, to be paid by my executors to her guardian and by him put to interest until she comes of age.

SIXTEENTH, it is also my will and desire that my executors pay to the guardians of my three youngest sons, JOB, EMANUEL and GEORGE SHEPPARD, the sum of five hundred dollars, to be by them put to interest for the purpose of educating them, should it be wanting. Should it, or any part of it, remain unexpended, when my youngest son comes of age, the balance to be equally divided between all my children, share and share about.

SEVENTEENTH, I give and devise to my niece JULIA ANN SPEAR, the sum of one hundred dollars.

EIGHTEENTH, it is my will that in case my wife should prove to be in a family way at this time and should be delivered of a living child, then in that case the said child to draw an equal share with the rest of my children.

NINETEENTH, my will is that my executors sell that lot of land where my sawmill stands, purchased of ALEXANDER McKEEVER, containing about 10 acres more or less, also all of my personel property not otherwise disposed of in this, my will.

TWENTIETH, It is further my will that whatever may remain that has not been disposed of in this, my will, that it be equally divided between my 10 sons, share and share about.

IN TESTIMONY WHEREOF I have hereunto set my hand and seal this 4th day of May, 1840.