Your brothers, sisters, children, parents...
Make no mistake, your relationships
are the heaviest components in your life.
~Ryan Bingham

The journey was on two lane roads all the way, along what is today a bustling interstate highway. In the winter of 1942 it was slow going compared to recent times. At that time World War II was in full swing, with San Diego being a major player in "the war effort."

Grandpa Leroy Gower, with his son Hendrix and pregnant wife Starlene had come to San Diego the previous summer to get jobs and make enough money to send for the three girls they had left behind in Oklahoma. After several months "the men folk" scrimped and saved enough to send money home. Grandma Gower then made travel arrangements for her and her daughters Maida and Vicki to come to the West Coast in the most practical way: by Greyhound bus.

Traveling by bus was a very common way of getting around the country in those days. The accompanying image is a poster from 1942 which illustrates how common bus travel was and how it even contributed to the all encompassing effort to win World War II. 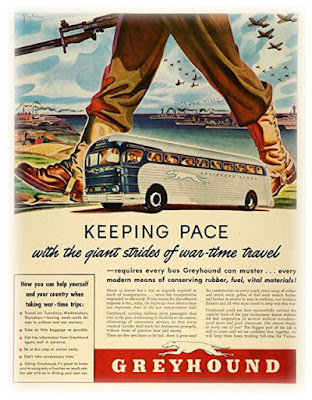 My mom remembers it being a very difficult 1,400 mile trip. The emotional part of separating from their father and other family was hard enough. It was also difficult leaving the area of the country that had been home to them, where they had been settled and felt comfortable, and to adjust to a place they had never even seen before. San Diego was a big city that must have stood in great contrast to the small country town of Okemah, Oklahoma. The physical part of the bus trip was difficult too: sitting hours on end, day and night, watching the desolate Southwest landscape pass by. Besides all that, onboard bathrooms did not come along until 1954!

It was a draining journey for many reasons for these three women. Mother Nola was just 39 years old, while daughters Maida and Vicki were just 18 and 9 years old. They traveled alone as they made their way to their new life in San Diego.

﻿ In the 75 years since that time the Gower family, which numbered just 6 in 1942, has grown and evolved and scattered tremendously. Before the decade of the 1940s was complete, both daughters were married and four Grandsons had been born to Leroy and Nola, myself being the fourth. In their first 20 years in San Diego all 12 Gower grandchildren had been born, and the family was enjoying the prosperous life of the post-war years in Southern California.

Leroy and Nola are gone now, of course, but their legacy remains. Their descendants, which number over 50 today, have scattered to Washington, Texas, Arizona, and even Tokyo, Japan. My immediate family and I are among the few descendants who still live here in San Diego. Great Grandsons Shawn and Lloyd Gower and their families are the only others who still live here in the San Diego area.

A lot has happened to the Gowers in those 75 years since Leroy and Nola's family came to San Diego from Oklahoma. But it all goes back to those watershed events of 1942, when the decisions were made to move west, and then the hard work of relocating took place. I am grateful to my grandparents for their foresight, and the challenge they accepted to pick up roots and relocate themselves in California. Their decision to move west set the course for our family which has had tremendous ramifications for each of us.
- - -
Steve Shepard
Posted by Steve Shepard at 11:59 AM