On this day in 1979 my brother Gary and his wife Cindy of Oak Harbor, Washington were married at our home in Los Alamitos, California. The first 24 years of their life together were spent in the San Diego area. The last 18 years have been spent in Western Washington to be near our mother and other family in the Anacortes, Washington area. Gary and Cindy are an important part of the care-giving team for our mother Maida Shepard. Happy 42nd Wedding Anniversary and best wishes to Gary and Cindy for many more happy years together!

On this day in 1915 my Grandparents William Shepard (1888-1976) and Bura Davis (1896-1986) were married in Beaver County, Oklahoma. It was 106 years ago that Will and Bura were united in marriage at the home of the local minister of the South Flat Church of Christ in their community. In San Diego in 1975, just a year before William Shepard died, and after 60 years of marriage, he reminisced about his wedding day, and his bride, by saying this: 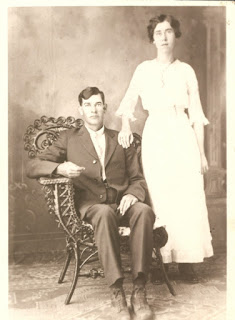 She was quite a Sunday School girl. I had just come into the church myself [the South Flat Church of Christ] in December [1914]. My dad had come in a little earlier than that. He was on his death bed with cancer and wanted to see me become a Christian before he died. So I did.

I had my first model T car. To get married we had to go to another sod house where the preacher lived. It was a real wet spring and water was standing everywhere. We didn't have highways. Just old roads. I didn't think we could make it by the regular road so we went on the higher country and ran into a lake and got stuck. We sat there in that car in the mud nearly all day. Finally an old gentleman who lived there pulled us out with his team of horses. It was about 3 or 4 o'clock. The preacher then tied the knot and we went home the way we should have when we went out to see him. He must have done a good job tying the knot because it is still tight.

On this day in 1870 my Great Grandfather James Brooks Davis was born near Spencer, Indiana. He was the much admired father of my Grandmother Bura Davis Shepard, who chose her father's birthday as the day to marry William Shepard in 1915. James died at 58 years old in Beaver County, Oklahoma of a stomach ailment.

In 1913 Jim Davis, after living in Indiana his entire 43 years, packed up and moved west to Beaver County, Oklahoma, a move of some 900 miles. He migrated with his wife Callie, also a native Indianan, their 7 children (ages 5 to 16), AND his wife's special needs brother Clayton Spear. To pack up and move a family that size and configuration required an ambitious pioneering spirit.

But Jim Davis was from pioneering stock. It was in his blood. His grandparents Alexander and Jane Davis had braved the American wilderness some 60 years earlier when they migrated from Monroe County, Ohio to Owen County, Indiana. And they did so with several young children, including my Great Great Grandfather Charles Davis. The stories of their adventures must have been the stuff of many a conversation around Davis dinner tables during James' early years. We remember him, on this his birthday, with admiration for his love of family and his willingness to work for a better future. He is buried today alongside his wife Callie in Sophia Cemetery in Beaver County.
- - -
Steve Shepard

Posted by Steve Shepard at 6:50 PM