Today, November 1, is the birthday of my mother Maida Gower Shepard of Anacortes, Washington. 98 years ago she was born in Mountain View, Arkansas. She was raised in Okemah, Oklahoma, the second child of Leroy Gower and Nola Shannon Gower. 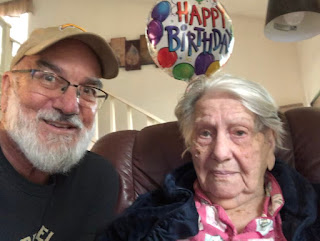 In 1942 (80 years ago today) Mom celebrated her 18th birthday as a senior at Okemah High School. Even though she and her family had lived in Okemah for 17 years, they were making plans to leave Oklahoma for California, which was the land of opportunity at the time. Mom's father Leroy and brother Hendrix had already relocated in San Diego to find jobs and a place to live. In late December of 1942 Maida and her mother endured an arduous bus ride from Okemah, Oklahoma to San Diego. But it was well worth it to be reunited with her father Leroy and brother Hendrix in Southern California.

For the next 36 years she lived in San Diego, where she met and married Eugene Shepard, with whom she raised their 6 children. In 1978 they moved from San Diego to Anacortes, Washington where she has lived for the last 44 years. The picture on the right shows Mom and me in a picture that was taken earlier today as her birthday began.

Maida lives with her daughter Barbara who is her primary caregiver. This evening of her birthday we had a happy family party as we celebrated this special birthday. Best wishes to Maida for many more birthdays.
- - -
Steve Shepard

Posted by Steve Shepard at 7:39 PM