Saturday, July 19, 2008 is the date for the Shepard Family Reunion this summer in Anacortes, Washington. Barbara and Maida Shepard and other family members are making plans and arranging for a very special event. You are invited!

Thanks for your responses to my question about the unknown youngster in one of the pictures I sent. Maida and Joan and Kim all responded and said it looked like Shannon Wilk, granddaughter of Pauline Shepard Russell. I think they are right. As a follow-up, I googled Shannon Wilk to find out where she might be, and found an interesting family fact.

Family Fact: Most of you probably don't know that Phil Wilk, Shannon's father, died last September. Phil was married to Beverly Russell, daughter of Bill and Pauline (Shepard) Russell and lived in San Diego for many years. Below is a quote from a website which tells of Phil's passing, and mentions that Shannon Wilk (and her daughter!) now live in Atchison, Kansas. (Her exact address is unknown to me. Does anyone know it?)


Phillip G. Wilk, 72, of Atchison, [Kansas] passed away Monday, Sept. 17, 2007, at the Atchison Hospital.
Phillip was born Feb. 8, 1935, in Leavenworth, the son of Paul and Vera (Mobley) Wilk. He graduated from Leavenworth High School. Phillip entered the Navy in 1953 and made San Diego home for 34 years. After four years in the Navy, he went to work for San Diego Gas and Electric, where he was in charge of records management, and later retired. Phillip loved to cook, read, tell stories and attend flea markets. 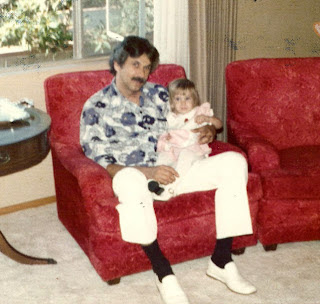 Upon retirement, he moved back to Leavenworth for one year and then to Michigan. He later moved to Massachusetts, until settling in Atchison in 2005. Phillip married Beverly Jean Russell in 1965 and together they had two children, Karl Wilk and Shannon Wilk.
Survivors include his daughter, Shannon Wilk and a granddaughter of Atchison; Frank Bockach of Atchison; Gary and MaryAn Wilk of McLouth; Sandy Smith of Fayetteville, Ga.; Mary and Wayne Jennings of Effingham, Kan.; and numerous nieces and nephews. He was preceded in death by his wife in 1974 and his son in 1997.

Memorial services will be at noon Saturday, Sept. 29, 2007, at the Community of Christ Church, Ninth and Santa Fe streets in Atchison. The body has been cremated. Memorial contributions may be made to the American Cancer Society and may be sent in care of the Becker-Dyer-Stanton Funeral Home.

Family Faces. With this post I am including two more pictures. The first is an old one from June, 1975, a picture of Phil Wilk holding his daughter Shannon at the Russell home in San Diego. Beverly, his wife and Shannon's mother, died tragically at 35 of a brain aneurism just 6 months before this picture was taken. 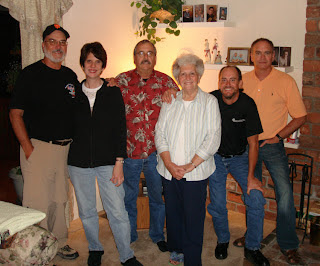 The second picture evokes happier thoughts; it is Maida Shepard and her 5 children: Steve (me), Barbara, Gary, Darrell and Russell. It was taken last summer in Anacortes, Washington.

Do you have some family news you would like to share with others in your family: a birth or a milestone birthday, a move to a new address, a graduation, something special about your children, a marriage or some other event worth sharing? I would be glad to pass it on for the rest of the family to read. And, of course, if you have a new (or old) family picture you'd like to share, email it to me.
- - -
Steve