Hello from Northern California on this day before the Ides of March!

Birthday wishes TODAY to Jerry Clark, in Lubbock, Texas! He was born on this day in 1950. Jerry has been a successful Balfour and Taylor Publishing Company Representative in Lubbock, Texas for over 30 years. He has lived in Lubbock since the late 1960s. when he was at Lubbock Christian University. Next month he and his wife Cathrina will celebrate their second wedding anniversary. Congratulations! They will both be with us this summer at the family reunion.

Fascinating Family Fact: Did you know? People have married into our Shepard family with very diverse ethnic origins -- Native American, Columbian, Hispanic, Irish, Norwegian, and many others. Those who marry into our family are not "direct descendants" of our Shepard ancestors, but they are very much a part of our family and contribute significantly to our life together. And most of them become parents of "direct descendants". But remember this: the Adam and Eve story reminds us that in the final analysis we are ALL blood related. 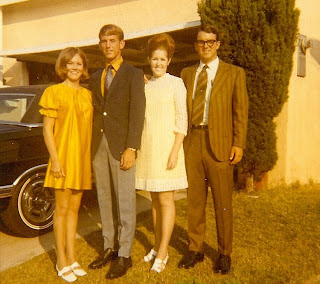 Family Faces. I am including two family pictures (You can click on the pictures to enlarge them). The first is an old one from August, 1970 and shows Linda Shepard, Jerry Clark, my wife Cindy Shepard, and me -- all of us in our early 20s. (Did we know how to dress back then, or what?) This picture was taken in front of our home on Armstrong Street in San Diego, possibly just before the rehearsal dinner for Linda and Jerry's wedding at the Linda Vista Church of Christ. Linda and Jerry were students at Lubbock Christian University at the time.

A year later Linda died in a tragic car accident, one of several untimely deaths in our family in the early 1970s. Every family member who lived at that time can attest to how difficult those deaths were, but also how they deepened us and our relationships. We have been blessed that Jerry Clark has remained a part of our family ever since Linda's death in 1971. In August of 1993, 22 years after the accident, a daughter was born in Anacortes, Washington to Linda's youngest brother Russell and his wife Pam. The name they chose to give her? Linda Shepard. 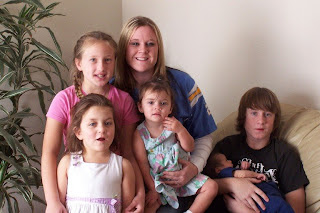 The other family picture is a December, 2006 photo of Darren and Vicki Boyd's 3 children - Courtney (in the blue charger shirt), Brandyn (sitting) and Kori Lynn (in pink). In the picture are also Kim (Boyd) Clark's 3 grandchildren - Ciara Ortiz, Ashlyn Ortiz, and Damian Ortiz (being held by Brandyn), children of Jeremy and Desiree Ortiz. All 6 live in the San Diego area. Darren and Vicki's oldest, Courtney, will graduate this spring from High School in Santee, Ca.

Remember: Shepard Family Reunion, Saturday, July 19, 2008, Anacortes, Washington. Maida and Barb and the others in Anacortes continue to make plans and look forward to being welcoming hosts for the event. We hope YOU will be there!

[P.S.... If you know of other family members or friends who would like to receive these messages, please ask them to send me an email at shepard@sierrawebworks.com -- or give me their email addresses -- and I will include them on the email list. If you have their physical address, please send that to me as well and I will make sure they receive an invitation to the reunion by US Mail. Also, please let me know if you would rather I use a different email address for you, or if you would prefer NOT to receive these emails.]

Anonymous said...
This comment has been removed by a blog administrator.
12:15 PM

Anonymous said...
This comment has been removed by a blog administrator.
2:33 AM