Hello from San Diego, along with nephew Patrick Shepard (of Bothell, Washington) who is enjoying a well deserved vacation in Southern California after having his nose to the grindstone of High School and after-school employment. Pat is here visiting his father Darrell's home town and seeing the sights. (I had forgotten how beautiful San Diego can be in spring time!)


Fascinating Family Fact: Did you know? I mentioned a few weeks ago that "William" was a very common name in our family, and has been given to at least one family member in William Shepard's lineage since at least 1835. Since I shared that with you, I have discovered that Gram (Bura Davis Shepard) had a grandmother named Margaret Francis Williams. Her Williams lineage can be traced back to -- you ready for this? -- William Williams, born 1745 in Fairfax, Virginia. (No word yet on whether his middle name was Bill!) 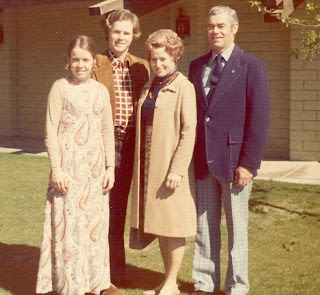 Family Faces. I am including two family pictures. The first is a 1974 picture of Beryl and Elmer Shepard and their children Joan and Dane. After both of them served in WWII, Elmer and Beryl married in 1946 and raised their children in the San Diego area, near El Cajon. They built a beautiful home on Osage Trail in Winterhaven, a place of numerous family gatherings where board games were played and home made ice cream was cranked by hand. For many years Gram and Grandad lived right next door in a rented house. (Did Gram and Grandad EVER own their own home?)


It must have been in the late 1970s that Elmer retired from his work on North Island, and they moved to Beryl's hometown of Henderson, Texas. Beryl died nearly 15 years ago, and Elmer now lives in Oklahoma near his son Dane and his family. This picture was taken around the time of Joan's 20th birthday, about the time she was a student at Lubbock Christian University. 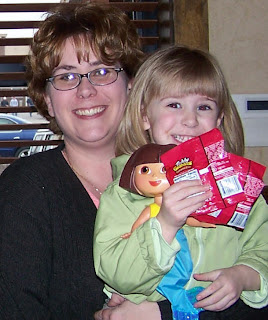 The other is a picture of Shannon Wilk and her daughter Emma Beverly Jean Wilk, who will be 3 in June. Emma is named after her grandmother Beverly Jean Russell who died in 1974. Shannon and Emma now live in Atchison, Kansas near Frank Bockach, who was her father Phil's partner for 28 years before Phil died last fall.


Thanks to Kim Clark for this picture, which was taken recently when Kim and husband Jeff visited Shannon and Emma for the first time in many years. Shannon and Emma look forward to coming to the family reunion this summer and getting reconnected with the family.


Behind every picture there is a story - many stories in fact - and these that I have just shared are only a few that come to my mind when viewing these two pictures. If I don't have all my facts exactly right, please let me know.

Hello, Steve! I enjoy your family emails immensely and appreciate the considerable amount of time you must spend collecting information. Recently, I've been preoccupied planning a trip to Oklahoma and Texas. I'll be helping Dane clean out Dad's house, getting it ready to sell. I'll also visit Dad and family. Thelma and Kim are flying in, too! Havilah [and husband Jason Reynolds] is in transition and does not have home email right now. Havilah was born in East Texas. We lived there for about ten years before moving back to California. This will be my first visit to Dane's new home. I attended Lubbock Christian for a year in the '70s and remember Jerry [Clark]. Small world!

Happy Birthday next Thursday to our son Nathan Shepard in San Francisco. Nate is a Computer Analyst for Wells Fargo Bank in San Francisco where he has lived for about 5 years. He enjoys traveling (he'll leave for Hong Kong next week!), snow skiing, working out, his cat Socket, online gaming, and life in the big city. He enjoys family too and is making plans to be at the family reunion this July.


Remember: Shepard Family Reunion, Saturday, July 19, 2008, Anacortes, Washington. We hope YOU will be there to catch up with other family members!


Steve
Posted by Steve Shepard at 9:15 AM