Greetings to you all, from New Jersey to California, from Washington to the midwest to Oklahoma and Texas! I hope spring continues to be as beautiful in your part of the world as it is in ours. The California poppies along the roadsides are as bright and colorful as we have ever seen them.

Fascinating Family Fact: Did you know? Our family history includes some names that are still common today like William, John, Mary and Sarah. But there are also, in the branches of this big tree of ours, some names that you seldom (if ever!) hear today - like Rozilla, Salatis and Salathiel (twins), Zona, Isolana, Ulysses, Udorous, Vashti and Marmaduke. I am NOT making these up! They are all first names of our relatives and you can find each of them listed in our family tree on Ancestry.com. Any of you getting some ideas for naming your next child? ;-) 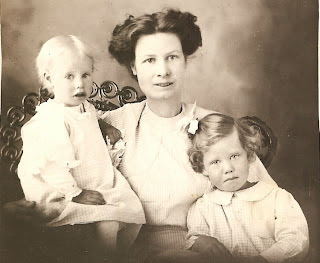 Family Faces. With Mother's day coming up next weekend, I am including two family pictures, both of groups of women. The first is a picture of Grandad's only sibling, his sister Sadie J. (Shepard) Pruett (1892-1980), and two of her daughters, Gayle and Alberta. This picture appears to have been taken at Gram and Grandad's wedding in 1915. Sadie was married to Levy Pruett, with whom she had one other child, Twila, in 1929. Sadie's part of the family did not move to California when Gram and Grandad did in 1940, so they were not well known to most of us. But there must be a whole branch of our family, descended from her, that lives in the Oklahoma area and elsewhere. Do any of you know about them? 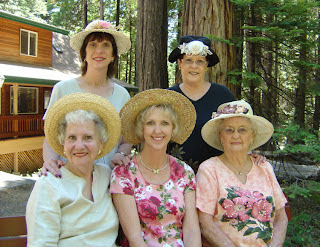 The other is a more recent picture of a group of women called "the Yayas". In this picture are women who are mothers to many of us: Maida Shepard, Jane Brock, and Paula Harris (Cindy's mom) on the front row, and Barbara and Cindy Shepard on the back row. They live in places as diverse as Washington State, Northern and Southern California, and Lubbock, Texas, yet they get together each year for a special week in some place around the country. This picture was taken at our home in Dorrington, California in the summer of 2004, when they chose to visit the Sierra Nevada mountains of California. (Click here to see a slide show of a different trip the Yayas took.) Comparing the two family pictures you see here, it is uncanny how much Barbara and her great Aunt Sadie look alike. Did you notice?

Plans continue to take shape for the family reunion July 19 in Anacortes, Washington. The food, the fellowship, the family ties are all just a few of the reasons it will be a wonderful event. You may have received another letter of invitation recently from Barbara and Maida which referred to the latest plans. (If you did not get a letter, be sure to send your physical address to me or one of the Anacortes folks and we will make sure you get one.)