Hello from Anacortes, Washington while visiting with family and looking forward to the family reunion coming up in just 7 short weeks. The plans are starting to come together as arrangements are being made for a comfortable location, a fine meal, and an enjoyable program. We look forward to having a great time. If you haven't already done so, please let one of the Anacortes folks know if you will be attending.

Fascinating Family Fact: Did you know? This coming Monday, June 2, is the graduation day for one more of our High School graduates, Lyndsey Aquiningoc, daughter of Kerri Aquiningoc and granddaughter of Gary Shepard. She is among those family youth who were born in 1990, that I referred to a few weeks ago. We celebrate with her and her family as she graduates from Weatherford High School in Weatherford, Texas. Congratulations! (see picture below)

June 2 is also the 138th anniversary of the birth of James Brooks Davis, Gram's father, and Lyndsey's great great great Grandfather. Having been gone so long, he is not well known to most of us, but Gram always spoke very highly of him. He was usually referred to by all three of his names. He died at the relatively young age of 58 (for some of us that is relatively young!), when Gram was only 32.

He was one of those "transitional" people in our family, who was adventurous enough to uproot his young family and make a major move. The family had deep roots in Spencer, Indiana. Both James Brooks Davis and his wife Callie Spear had lived in Spencer all their lives, as had Callie's mother, Maggie Williams, born in 1845. But for reasons that have been lost to history, around 1910 they decided to move the 900 or so miles to Beaver County, Oklahoma. Perhaps because it was the land of opportunity at the time. Perhaps because others in their family had already moved there or would be moving soon (see the picture below of James Brooks and his brothers AND father, taken in Oklahoma).

It could not have been an easy transition for the young family of 9. At the time Gram was about 15 and the oldest of the 7 Davis children, the youngest of whom was about 4. A Beaver County historical record says that they moved by train and then by wagon. It was an important move: within just a few years of arriving in Oklahoma, the teenager Bura Davis met and married a handsome 27 year old neighbor named William Shepard, and a new family had begun, the one to which we all belong. 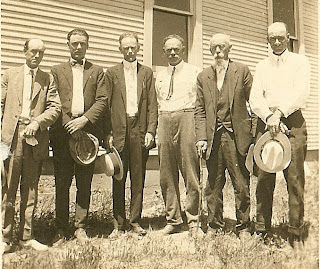 Family Faces. I am including two family pictures. The first is a picture of Gram's grandfather Charles Edward Davis (1849-1926) and his 4 sons, including James Brooks Davis, Gram's father. The picture was probably taken in the early 1920s. Dane asked his father Elmer recently about the people in this picture. Here's what he said...

The picture is of our great, great grandfather Davis [with the beard] and his sons. It was taken at the South Flat church of Christ building in Beaver County, out in the country several miles from any town. Grandad and Gram met at this congregation. The men, from left to right:

Zaley Davis -- the bandmaster of Booker High School and of a frontier, community band known as a "booster band." Grandad played cornet in this band. Zaley moved to Shamrock, OK and then to Lubbock, TX continuing his career in leading bands.

Benjamin Davis -- He was the youngest son and a WWI vet.

W. Morton Davis -- He was a gospel preacher and held meetings at the South Flat church. He spent his years in Texas, including Paris and Dallas. He wrote for the Firm Foundation publication for 25 years. 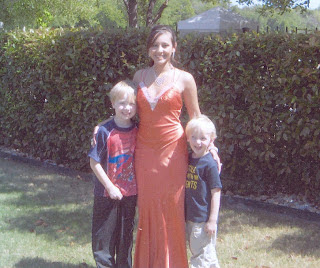 James (Jim) Brooks Davis -- He was the oldest of the brothers and had five daughters and two sons: Gram (Bura, the oldest), Lawrence, Myra, Jess, Wynona, Esther and Margie.

The other picture, taken earlier this month, is of high school graduate Lyndsey Aquiningoc, and her cousins Nate and Kyle Sauvage. The boys are children of Kelly and James Sauvage, also of Weatherford, Texas.
--
Steve
Posted by Steve Shepard at 10:08 AM

I was looking for Lyndsey and myspace and googled to find her and Mandy. I used to live down the street from them and was wondering if you knew how I could get in touch with either of them? :) Thanks!

If you want to message me back, go to www.myspace.com/homeisheaven