Hello on this smoky day in our part of the world. Since Cindy and I live in a forested area of Northern California, we alway get nervous when the fires starting burning like they are now. There are none burning in our immediate area, but the sun stays a reddish color from the smoke of the fires that still rage 40 or more miles away. It makes for beautiful sunsets, but the air quality is not good, and is a constant reminder that the next fire could be much closer.

Our Shepard family reunion is next weekend on Saturday, July 19, 2008, at the Anacortes Christian Church fellowship hall (12th St at M Ave) in Anacortes, Washington. We will gather at 12 noon, meet and greet one another, enjoy a catered Barbeque meal, laugh at old and new family pictures displays, view a pictorial family tree, and much more.

Fascinating Family Fact: Did you know? There are about 70 living members of our family today. About 25 of them will be at the reunion next weekend. I mentioned two weeks ago that the family descendants of William and Bura Shepard number 82 people. But that number included 12 people who have died, which leaves about 70 living members of the family. That includes family births as well as those who have married into the family. The largest portion of that 70 is Eugene and Maida Shepard's part of the family, with their 6 children and their individual families. 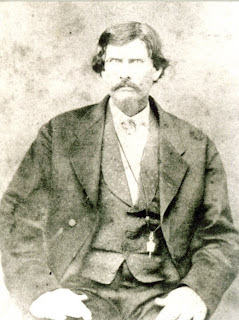 Since we have not been in touch with Pauline's son Rex Russell and his family for several years, we are not sure how many new births there may be in that part of the family. So the number of living family members may actually be a little larger. With the number of older teenagers and young adults in our family right now, some of us are thinking that number of 70 will grow soon. In other words we may be looking at a modest baby boom in the next 5 to 10 years, a heartening thought as we look to the future.

Family Faces. I am including two family pictures. The first is a picture which I received recently from a long lost cousin named Roberta Owens Brooks of San Antonio. She is a distant relative of ours who saw our family tree on ancestry.com and contacted me. This picture is of our common ancestor Edmond Owens (1795-1864), her great great grandfather, who was Grandad William Shepard's great Grandfather (through his mother Elvira Owens). I am very grateful to Roberta for sending me this picture.

To be completely honest Roberta did mention to me that she is only fairly certain the picture is Edmond Owens. (The back of the picture says "Grandad Owens", an ambiguous reference! A word to the wise -- when you label photos, give the person's NAME, not "grandma" or "my uncle".) The person in the picture could be Edmond's son Payton Owens (1826-1872, who was Grandad William Shepard's grandfather). In either case this is now the oldest family picture I have, probably taken during or before the Civil War. Edmond Owens was born in 1795. How old would YOU say he looks in this picture? 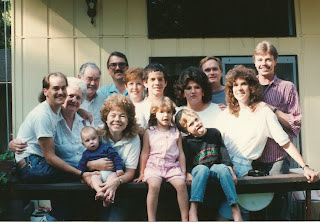 The other picture is of a family gathering back in 1990 at the Shepard family home in Anacortes. It shows Maida and Eugene Shepard, on the left. Then from left to right are Russ Shepard, Steve, Cindy and Nathan Shepard, Mary and Darrell Shepard, and Barbara and John Clay. In front are Steven Paul Shepard, Pam his mother, and Rachel and Christopher Shepard.

Family News. This past week I sent out an email regarding the traffic accident in Utah involving Havilah's father Art Colgain and his wife Jill. Havilah Colgain Reynolds is Joan Shepard Colgain's daughter. Last I heard Jill was still in critical condition, Art had been released from the hospital, and Havilah was on her way from her home in Auburn, California to be with her dad in Utah. Does anyone have a more recent update? Our prayers and best wishes are with them all.
--
Steve
Posted by Steve Shepard at 12:23 PM

Your blog keeps getting better and better! Your older articles are not as good as newer ones you have a lot more creativity and originality now keep it up!