Hello on this July 4th mid-summer holiday! I hope you are all able to enjoy this day with family and friends. Cindy and I are doing something a little different this year -- enjoying a quiet holiday at home alone. Nathan is vacationing in Southeast Asia -- of all places! -- but will be home in time for the three of us to go to Anacortes in two weeks for the family reunion.

Fascinating Family Fact: Did you know? On this July 4th holiday it is interesting to note that our family has been almost entirely rooted in the U.S. since before its founding in 1776. Drive around any U.S. town or city today and you will see a large percentage of citizens who are first or second generation Americans. And the number is growing rapidly. But of all the family roots that converge into Will and Bura Shepard, the one that winds its way back to another country first is traced through Gram's (Bura Davis') mother, Caroline Spear (see pictures of her in messages dated June 6 and June 20). Her great grandfather was an Irishman named James Spear, born in County Armaugh, Ireland in 1768.

James Spear came to the U.S. as a young man -- probably not long after 1776. He married an American born woman from Delaware named Elizabeth McConnahaw, had 12 children with her (!), and eventually died in Belmont County, Ohio in 1821. He is the first person I can find among all the ancestors of Will and Bura Shepard who was born in another country. In other words, you have to go back 240 years -- before there was a United States -- to find a single ancestor in Will and Bura's family tree born in another country. To me this is pretty amazing. And we are talking here about ALL the ancestors of Will and Bura, going back four generations before them. The amount of U.S. history experienced first hand by these ancestors is staggering. It covers the entire history of our nation -- every president, every war, every milestone, every single July 4th holiday ever celebrated. 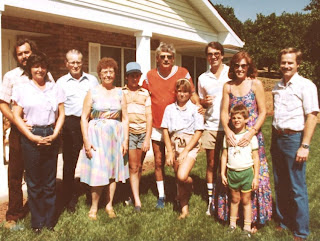 Now to be sure, there are a few gaps in the information I have on the roots of our family, especially in Grandad's (William Shepard's) paternal line before the civil war. So there may be an exception to what I'm saying, but it's unlikely. This, of course, refers only to the ancestors of Will and Bura Shepard. We each have other ancestors named Gower or Boyd or Russell, etc., who are are a different story altogether.

Family Faces: I am including two family pictures. The first is a picture that Dane sent me a while back, taken at a family gathering, probably in Valley Center (near Escondido, Calif.) at the home of Rod and Violet Ramirez. Left to right in the picture are: Gary and Cindy Shepard; Bill and Pauline Russell; Carl, Phil and Shannon Wilk; Steve, Cindy and Nathan Shepard; and Dane Shepard. I am guessing the year this picture was taken is 1983 or 84, based on Nathan, who looks to be 6 or 7. Can any of you make a better guess? 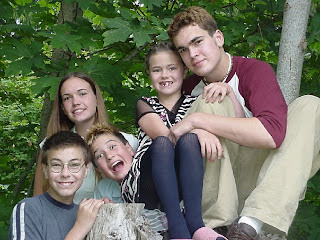 The other is a picture of 5 of Maida Shepard's grandkids in Anacortes, Washington. Taken in the summer of 2002, it shows -- starting from the bottom left -- Steven, Rachel, Patrick, Linda and Christopher Shepard. Steven and Linda are children of Russ and Pam Shepard; and Rachel, Pat and Chris are children of Darrell and Mary Shepard.

Celebrations: Congratulations to Jerry Clark and to Jane Brock on the birth of their third grandchild last Saturday! Miller Sims Cave was born to Matthew and Becky Clark Cave in Weatherford, Texas.
- - -
Steve
Posted by Steve Shepard at 10:34 AM