Aloha to all of you, and Happy Halloween from Maui, Hawaii, where Cindy and I have taken our mothers -- Paula Harris of San Diego and Maida Shepard of Anacortes, Washington. Nothing "scary" is happening with us right now. Instead we are happy to report that "the girls" have been very well behaved to this point! We will see what happens Saturday, however. In addition to being All Saints Day (woo-hoo!), it is also Maida's 84th birthday and we plan to celebrate!

Maida is, of course, one of only four remaining members of our family from the first generation after Will and Bura Shepard. She became their first daughter-in-law 63 years ago this past spring. That's when she married the young military man Eugene Shepard, during WWII, in a small private ceremony in the parsonage of the El Cajon Blvd Church of Christ in San Diego.

It is hard for most of us to appreciate what an amazing, hectic time the early 1940s were for our family.
Whew!

Maida's next 33 birthdays would be spent with Eugene in San Diego, where they raised their 6 children. Her last 30 birthdays have been spent in Anacortes, Washington, where they retired in 1978. Since she has always enjoyed traveling, it is only fitting that her 84th birthday be spent in Hawaii, at a nice restaurant sipping fine Champagne. We toast the good health of both our mothers and plan to celebrate many more birthdays with them!

The first picture I am including was taken in San Diego in early 1945, while WWII was still raging, and shows birthday girl Maida Gower with Eugene and Elmer Shepard, in uniform. 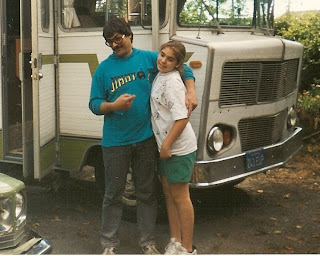 This coming Thursday is the Birthday of Havilah Colgain who lives in Auburn, Calif. She is the 8th great grandchild of Will and Bura Shepard; the daughter of Joan Shepard, and the grand daughter of Elmer Shepard.

The second picture I am including today shows Havilah and her father Art at the 1994 Shepard Family Reunion in Anacortes. Among the things she does these days is help people with their travel plans. Followyourtravel.com is her business website. Happy Birthday, Havilah!
- - -
Steve
Posted by Steve Shepard at 5:30 PM