Greetings from beautiful El Vendrell, Spain, on the Mediterranean coast, where Cindy and I are about to conclude our vacation here.

Next Wednesday is the 100th anniversary of the birthday of Bill Russell. Many of you may not even know who he is. He was Will and Bura Shepard´s first son in law, having married their oldest child, our aunt Pauline. Uncle Bill was a most remarkable man who had a leg amputated when a teenager and lived with an artificial leg for most of his life. He loved to sit next to the youngest child at family gatherings and wait for the shock on their faces when they bumped up against his artificial leg. It sounds a little bizarre when I mention this now - but at the time it was all a part of the amusing personality of this man that many of us knew as uncle Bill. To some, including Shannon Wilk, he was known instead as grandfather. Bill died in 1998 in San Diego at 89 years old. 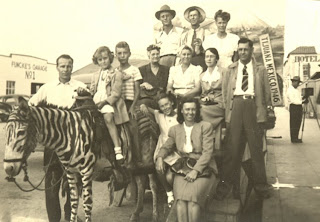 I am including two pictures. The first is an old one that shows 37 year old uncle Bill Russell on the left, along with a number of other family members, a few of whom were visiting from Oklahoma. (Click on the picture to see a larger view.) The picture was taken in Tijuana Mexico in 1946, just a few years after the Shepards had moved from Colorado to San Diego. We have several old pictures of family members in Tijuana in the early 1940s indicating that it was a popular place to visit in those days, especially with out of state relatives, as is the case in this particular picture. Tijuana is still a popular vacation destination for San Diegans, although surely it took less time to get back and forth across the border 62 years ago than the 2 hours or more that it takes today!

In the picture with uncle Bill is aunt Pauline Shepard Russell in the very front with Thelma (aged 10) next to her. Sitting on the Donkey/Zebra (?!) are Beverly (7) and Rex Russell (10). On the far right in the tie is Grandad (Will Shepard) with Gram (Bura Shepard) next to him. On the back row in the middle is Uncle Levy Pruett; in front of him and to his right, in the black dress, is his wife aunt Sadie Shepard Pruett. The other three people I cannot identify but I am fairly certain they, like aunt Sadie and uncle Levy, were visiting from Oklahoma. Thelma, Maida, or Elmer, can you help us out by identifying these people? 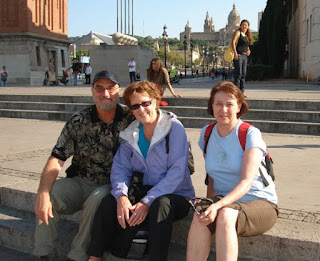 The other picture was taken just last week, also in a spanish speaking foreign country. It shows me and Cindy and our traveling friend Linda Tanner in Barcelona, Spain. In the background is the National Art Museum of Catalonia, which is located on the site of the 1992 summer Olympic games.

I received an email stating that Mary Shepard is doing much better and feeling her old self again. She will have some more tests done next week. Jerry Clark is also doing better after burglars broke into their house and conked him on the head. Our prayers are with both those families.