Greetings from Barcelona, Spain where Cindy and I find ourselves on this first Friday of fall. And indeed it is fall. We have had rain all day today, even though it has not been cold nor has it kept us from seeing the sights of this city of 3 million people!

Happy Birthday this coming Monday to Cathrina Clark, wife of Jerry Clark, who lives in Lubbock, Texas. It would be terribly inappropriate for me to say how old Cathrina is, but I will say that I was but a boy, who had just turned 10, when she was born, in Germany of all places!

We just got a report today from Jerry that he was mugged in his own home last week. In the middle of the night he was surprised by some burglars who had broken in. This was the new home that they just built and have not been in but a few weeks! Jerry writes, "I am doing good and am on the mend."

Our best wishes are with Jerry and Cathrina as they recovery from this shock and Jerry's injuries. Thank God it was not worse. We hope they will be recovered enough to celebrate Cathrina's birthday joyfully! 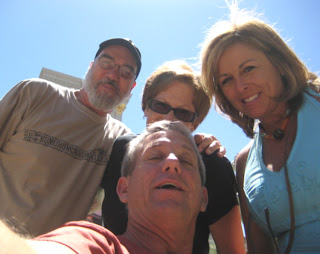 The first picture I am sending shows Cindy and me with Jerry and Cathrina when we got together for a few days last month. Thanks to Jerry for the picture. Cathrina is the one with heavenly sunlight emanating from behind her.

Many of you got a chance to meet Cathrina at the family reunion in July, but for those who don't know her, she tells me this about herself: "I was born in Dusseldorf Germany. My father was born and raised in Lancaster, S.C. My maiden name is Helms. My mother's maiden name is Hartig. She was born in Chemnetz, Germany. Her family moved to Lichtenstein during the war due to all the bombing. My mother and her sister escaped East Germany when she was 16 and her mother moved to Dusseldorf. My mother and dad met in Pforzheim and my father had to go back to the states about 7 months after I was born. My mother and I moved to the states when I was a year old. "

There is obviously a lot more about Cathrina that can be said, but let that be enough for now. Happy Birthday, Cathrina! 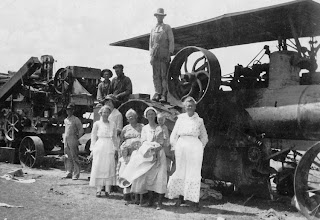 The old family picture I am including is yet one more of the pictures I recently received from Dane. (Click on the picture for a larger view.) He reported that his dad Elmer says, "It was taken in July of 1920 and features a threshing rig hooked up to a steam tractor/engine owned by Grandad (William Shepard). He (Grandad) is standing above the rest. The two men to his right are Lawrence (left) and Jess (right) Davis. On the ground (right to left) is Mrs. Erickson (a Swede from Illinois), Gram (Bura) holding Elmer, Gayle Pruett (girls head), Pauline next to her, Elvira, an unknown woman, Tillie Erickson in back, and an unknown man."

This is quite a period piece and shows the respective place that men and women had at that time in that part of the country. The men, in the shadows, dressed in dark, standing above the others, are the hard workers. The women and children, dressed mainly in white, are in front, looking clean and innocent and hardly affected by the huge machines and the grease and grime. Today our machines are mini-computers that children use with ease; but then the machines were gigantic, dirty and powerful, dangerous things.

As a final note, Mary Shepard has been very ill in recent weeks with what looks to her doctor like Kidney cancer. Other than some pain and discomfort she seems to be doing pretty well, but more will be known after tests are done. Our prayers are with you, Mary and we wish you the very best.
--
Steve
Posted by Steve Shepard at 4:13 PM