Greetings from Madrid, Spain, where Cindy and I woke up this morning on this last Saturday of summer. Tomorrow begins the first official day of fall, but you would never know it from the warm Spanish weather we are having. 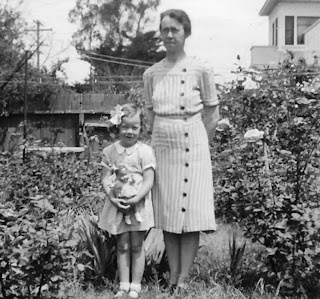 I am including a couple of family pictures. The first one is another of the pictures I recently received from Dane that was found in his father's photo archives. It shows a stern but well dressed Bura Davis Shepard with her youngest child Thelma Shepard (now Boyd). Dane tells me this picture was taken in 1941, behind Will and Bura's rented home on Granada Street in San Diego. That would put it within about a year of the time the family moved there in 1940 from Two Buttes, Colorado. That move began the presence of our family in San Diego, a presence that continues to this day.

Will and Bura's first three children, Pauline, Elmer and Eugene, were born in 1916, 1918, and 1921, but it was not until about 15 years later that Thelma was born. When the family moved to San Diego, Pauline was already married to Bill Russell and together they had two children, Rex and Beverly. At the time of the move, Elmer and Eugene were in the service in WWII, or would be shortly, but Thelma was just a child of 4. She had actually been born back in Two Buttes just 2 weeks before her nephew Rex Russell, an interesting phenomenon that often came up in family conversations when I was young. 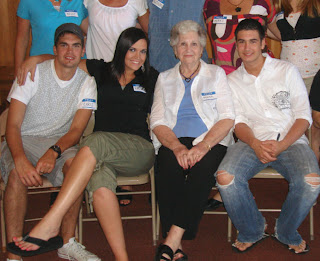 The other picture I am including was taken earlier this summer and shows a proud Maida Shepard with three of her grandchildren, the children of Darrell and Mary Shepard -- Christopher, Rachel and Patrick. All three live with their folks in Bothell, Washington. Donations to the Patrick Shepard clothing fund will be gladly accepted! (Do I sound like old school, or what?)

I mailed to a couple of you a CD that had on it the presentation that was made at the family reunion back in July, plus many more other family pictures. Some others of you may have asked me to send you a copy, but I am sorry to say I do not remember who. So if you would like a copy of that CD and have not received one, please let me know. I will be glad to send you one. Be sure to send me your physical address as well.
--
Steve
Posted by Steve Shepard at 4:00 PM