If you look deeply into the palm of your hand,
you will see your parents and all generations of your ancestors.
All of them are alive in this moment.
Each is present in your body.
You are the continuation of each of these people.
- Thich Nhat Hanh

Good morning from the cool mountains of Northern California, where the nights are getting cold and the days are brisk, and the sunshine reminds me that life is good and always to be celebrated.

Cousin Dane Shepard has suggested three possible dates for the family reunion next summer in Oklahoma: June 20 or 27, or July 18. Which of those three Saturdays will work best for you? Let Dane (dcflock@juno.com) know your preference among those three -- if you have one -- so that he can set the date and we can all begin our planning. Or let me know and I can pass the word to him. He wants to set a date by the end of the year.

This Sunday is the anniversary of the birthday of John Pouty Williams, an ancestor with the common name for our family, William, but with an unusual middle name of Pouty, a name not found among any other relative. He was born 202 years ago, in 1806, and lived just long enough to witness the arrival into the world of his great granddaughter, Bura Davis. He is our reminder that we each carry some "longevity genes" within us. He died at the ripe old age of 92 (VERY old for that day) in Spencer, Indiana, shortly after Gram's first birthday. Since Gram was born in that same little town southwest of Indianapolis, I would like to think that this aging nanogenarian had the opportunity to bounce baby Bura on his knees sometime before he died. Bura was his great granddaughter by way of his youngest daughter Maggie Williams (John Pouty and his wife Sarah had 9 other children before Maggie!). Maggie's picture appears in the post of June 20, 2008 of this blog.

The quote above from Thich Nhat Hanh speaks of the ways that our ancestors impact the lives we live today, especially our physical lives. I am grateful for the lives of John Pouty and Bura and Marjorie, whose combined 282 years carry with it the promise of long life for us, their descendants, if we take care of ourselves. 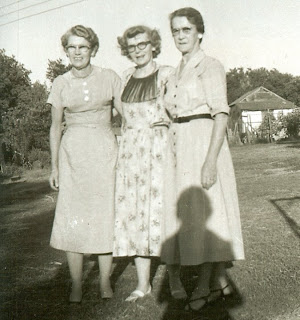 The first picture I am including today is a picture of Gram with 2 of her 4 sisters, Winona on the left and Marjorie in the middle. The picture was taken in November, 1957 in Tulsa, Oklahoma.

Here is the obituary of Gram's sister Marjorie Davis, the last of her generation, from last Sunday's edition of the Tulsa World.

Marjorie [Davis] Millikan Williams, 100, passed peacefully from this life November 6, 2008. This special person will be forever remembered in the hearts of her family and her friends. She was born December 27, 1907, in Spencer, Indiana. Her family moved to Beaver County, OK in 1912. She, John, and their sons moved to Tulsa in 1942. She was preceded in death by her husband, John Millikan (after 41 years of marriage); husband, A. C. Williams (after 12 years of marriage); son James Brooks Millikan; daughter-in- law Ila Millikan and 6 siblings [including Bura Davis]. In her early years she taught school, farmed, became "Rosie the Riveter" during WWII, was an LPN nurse, and sold real estate. She was a life-long member of the Church of Christ, and one of the joys of her life was teaching third-grade Sunday School class for 52 years. She won many blue ribbons at the Tulsa State Fair with her various entries. Survived by: sons and their wives, Arlen Millikan; Gary and Barbara Millikan; Jack and Karen Millikan; step-sons and their wives, Wayne and Rosie Williams, Don and Yvonne Williams; Bill and Mary Williams; 4 grandchildren; 7 great-grandchildren; 2 great- great-grandchildren. A memorial service will be held at 11 a.m., Friday, November 14th at the Memorial Drive Church of Christ. Interment at Memorial Park. 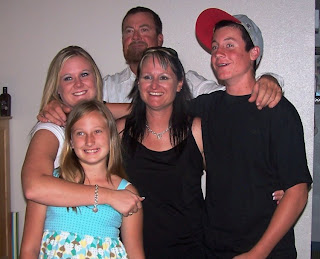 The second picture I am including today shows the birthday girl from last month, Kori Lynn Boyd, with her mom Vicki and dad Darren, and her older sister Courtney and older brother Brandyn. They all live in Lakeside, California. Darren is Terry and Thelma's son.

I received an email from Mary Shepard this past week that I would like to pass on to you: "Thanks for all of the prayers, I really feel that the power of prayer is working. I went for my pre-op appointment with my surgeon yesterday and felt a shield of comfort when we were talking. My surgery is scheduled for 7:30 am on Monday the 17th of this month. I check in at 6am, so please do pass the word and let everyone know how appreciative I am and how loved I feel. Thanks."

Our prayers continue for Mary and her family as she prepares for her surgery in Seattle this coming Monday.
--
Steve
Posted by Steve Shepard at 11:27 AM