Hello from San Diego, California where Cindy and I have just moved. We are still figuring out what to do in our retirement, but for now it will mean having our primary residence here in the city where we grew up. Cindy says, "Retirement is a hoot!" Our email addresses will remain the same, as will our cell phones, for now.

It is the week before Thanksgiving and I am grateful for several things: I am thankful that Mary Shepard's surgery earlier this week in Seattle was successful. Darrell reports that the doctor felt everything went as well as could be expected. More will be known next week, but for now the news is good.

I am also thankful that Dane Shepard is willing to host our next family reunion in Oklahoma next summer. He is still waiting to hearing from us, if we have a preference among the possible days he is suggesting for the reunion, which are June 20, 27 or July 18 -- all Saturdays in 2009. 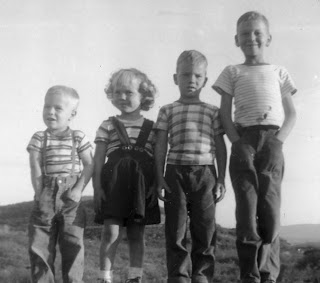 I am also grateful that Dane has spent time recently scanning some old family pictures, and passing them on. Both pictures I am including today I received from him recently.

The first picture is a gem, a newly scanned old photo, taken on Thanksgiving Day 55 years ago in Alpine, California, just east of San Diego. It shows 4 Shepard cousins, from left to right: Dane, Linda, Steve (me), and Gary. (Gary, please tell us what were you so happy about. You look like the cat that swallowed the canary!) Dane's parents, Elmer and Beryl, lived in Alpine for a few years in the early 1950s, an enjoyable place where the family occasionally gathered for holidays.

The second picture is of 90 year old Elmer Shepard, taken earlier this month with his son Dane, Dane's wife Cindy (Saunders), and their children Nathan and Kaylan. In an email I received from Dane, he refers not only to this picture, but also to Aunt Margie Millikan who passed away recently. He also answers the trivia question I raised last week in reference to the picture of Gram and Aunt Margie. 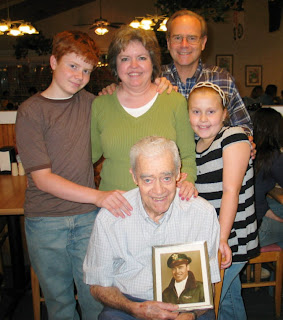 "In answer to your trivia question, the photographer was probably using a box camera [a "Brownie"] which had a viewing window in the upper right corner on TOP of the box which you held at waist level and looked down on. I still have one, and as a teenager I experimented with one using it for timed and multiple exposures. Dad said that when living in Two Buttes he received one when Kodak distributed box cameras to all 12 year olds. He didn't know if this was nation wide.

"I was sorry to hear of Aunt Margie passing away as I hadn't had the opportunity of locating her in Tulsa (two hours away). It would have been good to have seen her.

"I have also included a Veteran's Day picture of us with Elmer holding a picture taken in Lincoln, Neb. in 1945, right before he was discharged. Shortly after his discharge, he took the train from Omaha to Tulsa to visit with Margie and family. He had obtained a private pilot's license and took Margie and her son Jack for a plane ride."
Thanks so much, Dane, for these interesting historical notes.

Everyone have a wonderful Thanksgiving this coming week, wherever you are and with whomever you will gather. Thank God for the family we are, the relationships we share, and the ties that bind us.
--
Steve
Posted by Steve Shepard at 8:58 AM