The family is one of nature's masterpieces.
- George Santayana

Hello from San Diego in the midst of this Christmas season. If you are like us, you are very busy preparing for family gatherings, celebrating Christmas, and getting ready to do some traveling for the holidays. Family means a lot to most of us at Christmastime, which is one of the reasons it can be called one of nature's masterpieces.

Thursday of this coming week is the anniversary of the birthday of two of our ancestors, twin boys, with the names Salathiel and Salatis Davis, born Dec 18, 1856. (How did they come up with these kinds of names back then!?) One can only guess at how they nicknamed those two. Their older brother, Charles Edward Davis (pretty boring name by comparison), was Gram's (Bura Davis Shepard's) paternal grandfather, and therefore my generation's G,G,Grandfather.

Salathiel is the name of an Old Testament character, and is listed among the ancestors of Jesus (Matthew 1); while Salatis is the name of an ancient Egyptian King. Impressed yet? Their parents, Alexander and Jane Davis, had 10 children all together, including the one from whom we are directly descended, Charles Edward Davis. Among their other children was a daughter, to whom they gave the marvelous name "Samilda Dorcas Davis". (By the way, when I googled "Samilda", the very first entry that came up was a reference to her! It was a "Pedigree report of Samilda Dorcas Davis, daughter of Alexander Davis and Jane Buskirk, born on November 10th, 1853 near Spencer, Indiana." Pretty cool, huh?

Born in 1853, Samilda married a childhood friend named James Medaris in 1875, who later became a physician. They were both born in Spencer, Indiana (Gram's birthplace in 1896), but in 1893 when Oklahoma's Cherokee Strip opened to settlement, Samilda and James migrated there and settled northwest of Enid, near the property of Samilda's brother William Davis. They eventually made their home near there and helped found the little town of Helena, Oklahoma. They were among the founders of the Church of Christ in Helena. 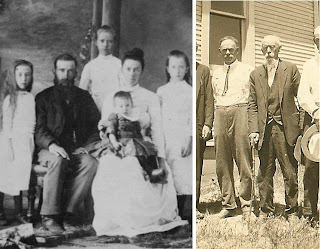 When Gram's (Bura's) family moved to Oklahoma from Indiana in 1912, they were following in the footsteps of Samilda, James and some other family who were already there. If you are interested you can select this link to find more information online about the lives of James and Samilda Davis Medaris.

The first picture I am including today is two old pictures in one. (Click on the picture to see a larger view of it.) The left hand side (taken about 1885) shows Samilda, her husband Dr. James Medaris, and 4 of their children. The right side (taken 35 years later, about 1920) shows Samilda's brother Charles Edward Davis (in the beard) with his son James Brooks Davis, Gram's father.

The looks on the faces of these family members from so long ago are so different from the pictures we take today, aren't they? They reveal a much more serious approach to life, a somber mood, almost a hardened resignation to the way life was. At the very least there is a certain awe for very nature of that marvelous new invention known as "the camera". 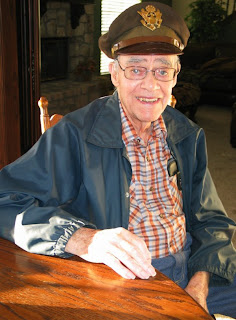 The other picture was taken on Veteran's Day last month and shows Air Force Veteran Elmer Shepard. It was sent to me by his son Dane Shepard, who said that this is "a picture of Dad I took today in honor of Veteran's Day. We [took] him to the Golden Corral restaurant which is a chain that offers a free meal to veterans on Veteran's Day."

Don't forget that Dane will soon be setting a date for next summer's family reunion in Oklahoma. (The reunion will take place near Dane, who lives just 130 miles from where Samilda and James settled some 115 years ago.) Dane needs your input on the particular day for the reunion, if you have a preference between June 20 or 27 or July 18.

If you have a picture or two of your family gathering this holiday season, please email it to me. I would be glad to share it with the rest of the family.
--
Steve
Posted by Steve Shepard at 9:51 AM