I don't care how poor a person is;
if they have family, they're rich.
~Dan Wilcox

Hello everyone on this day after Christmas. Cindy and I are in Anacortes celebrating Christmas with our family here. I hope your family gathering yesterday was as pleasant and joyful as ours was. I say that despite the fact that the Northwest is having heavy snow and cold weather.

Can you believe it: the first family email I sent was exactly a year ago, on the last Friday of 2007. After an entire year of family pictures and ponderings, I must say that there are still many more pictures to share and much more conversation to be had. I continue to welcome your emails about our family and invite you to send any pictures, new or old, that you would like to share. I also invite you to let me know of others who would like to be added to our mailing list. Thanks to all of you for the interest and support you have expressed.

26th ANNIVERSARY. This coming Wednesday is the 26th anniversary of my brother Darrell and his wife Mary Medina Shepard. They were married on New Year's Eve in Abilene, Texas, 1982. For most of their married life they have lived in the Great Northwest. They and their kids Chris, Rachel, and Patrick, presently make their home in Kenmore, Washington, a suburb northeast of Seattle. Darrell works for ProSource Wholesale Floorcovering in Bothell, and Mary manages a retirement community named The Ballard Landmark in Seattle. Happy anniversary to Darrell and Mary! 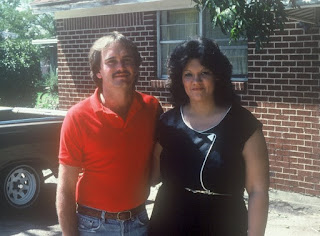 The first picture I am including today is of Darrell and Mary in 1983. Darrell says, "This picture was taken when we were newly married, living in Abilene, Tex across the street from Abilene Christian while I was still working on my bachelor's degree and Mary was working at the Petroleum Club of Abilene. We were standing in front of the one bedroom apartment we rented on an alley behind the University Church of Christ. Our rent was 37 dollars a month!

"We had recently found out Mary was pregnant with Christopher, our first child. You, Steve, took this picture; today is the first time I have seen it. In the background you can see the 1966 Ford Ranchero our dad gave to me when he and mom moved to Anacortes from San Diego. I drove it to Abilene with all my personal belongings in the back when I left San Diego in January of 1981 and entered college at ACU where I met Mary."

PAULINE SHEPARD RUSSELL. Sunday is the 92nd anniversary of the birthday of Pauline Shepard Russell. She was the first born child of Will and Bura Shepard, and arrived 3 days after Christmas in Sophia, (Beaver County) Oklahoma, in 1916. She died 10 years ago in Southern California, a year after her husband Bill Russell. Pauline and Bill are the parents of Rex Russell, the grandparents of Eric Russell and Shannon Wilk, and the great grandparents of little Emma Wilk. Shannon and Emma of Atchison, Kansas are the only two descendants of Pauline and Bill Russell that we presently have contact with. We are still unable to make contact with Rex and Eric Russell who, last we heard, live in the Reno, Nevada area. 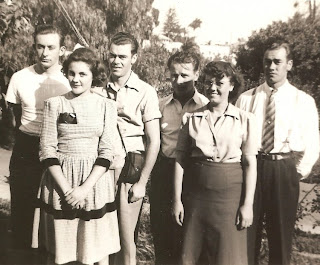 The second picture I am including shows Bill and Pauline Russell in San Diego, soon after they and the rest of the family had moved to SoCal from Colorado. Pauline was a young mother of 2 (Rex, 7 and Bev, 4), and not quite 27 at the time. Thelma tells me this picture was taken at Gram and Grandad's home on Albatross St in San Diego in 1943. In the picture, from right to left, is Eugene Shepard, his sister Pauline, her husband Bill Russell, then Elmer Shepard. Dane reports that his Dad Elmer says this about the picture...

"It was taken in San Diego around the time that William and Bura managed their first boarding house. The young lady is Eloise Sackett from Two Buttes (Colorado). She had come to CA to stay with our family to finish her senior year of high school. He also added your dad had dated her at one time. The Sacketts were neighbors and our family had stored some belongings in their basement when they moved to San Diego. As for the young man, all Dad could remember was that his name was Bert, that he was from CO (not Two Buttes), and that he was a boarder of William and Bura.

40th ANNIVERSARY. Tomorrow Cindy and I celebrate 40 years of marriage. Hard to imagine. It does not seem that long ago that I came home to San Diego from Abilene Christian College for the Christmas holidays and Cindy and I were married. It was on a Friday evening, at the La Mesa Church of Christ, just two days after Christmas, 1968.

Shirt-tail relative Ed Kilpatrick, (one of the Kilpatrick's related to Gram's sisters) was the young minister of my home church, the Linda Vista Church of Christ, and officiated at our wedding. There were lots of Harris and Shepard family members and friends at our wedding and a good time was had by all. We were both just 20, still in college, and hardly knew what we were doing. But after 40 years we can both say it has been quite a ride, and we are ready for a few more years together.

Enjoy what's left of 2008, and celebrate how rich you are to be a part of this wonderful, diverse family of ours!
--
Steve
Posted by Steve Shepard at 10:00 AM