Be who you are and say what you feelbecause those who mind don't matterand those who matter don't mind.
~Dr. Seuss

Happy New Year to all of you! May 2009 be filled with joy and happiness for each one, and may you experience new adventures that will make this the best year ever.

One new adventure that I hope many of you will experience will be a trip to Oklahoma in July. The date for the 2009 Shepard Family reunion will be July 18, 2009 in Oklahoma City. Actually it will be near the home of Dane and Cindy Shepard who live just outside Oklahoma City. Dane will let us know all the details as the date draws near, but for now make your plans and mark your calendar for Saturday, July 18.

Cindy and Nathan and I find ourselves in Cambodia on this first Friday of the New Year. Yesterday was NOT New Year's day for Cambodians since they traditionally celebrate the New Year on April 13. It was a special day for us, however, because it was the birthday of Nathan's fiancee Chenda Sou. So we did celebrate, but for a different reason!

Speaking of birthdays, this coming Wednesday, January 7, is the birthday of my wife Cindy, the retired banker. Happy Birthday to her! She loves retirement and wonders why she did not retire sooner. 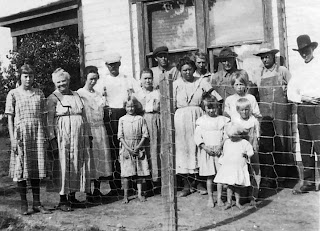 The first picture I am including today is an old picture of some of our family. (Click on the picture to see a larger view.) Dane sent me this picture a while back and gave me this description, which his dad Elmer had shared with him: This picture is "of a gathering somewhere in Oklahoma before 1931; from left to right are possibly Opal James (Dad was not sure about her), Elvira (Owens) [Grandad's mother], Bura [Gram], James and Caroline Davis [Gram's father and mother], Lawrence Davis, three unknowns, possibly Pauline with three unknown children, Grandad, and Cal Williams."

We do not have another picture quite like this one that shows Gram and Grandad as a young married couple, in the same setting with Gram's (Bura's) father and mother, who are on her left AND her mother-in-law, Elvira Owens Shepard, who is on her right. Do any of you recognize the other people in this picture? If so, please let me know.

This old picture shows quite a motley crew! It looks like a scene from the movie "The Grapes of Wrath". Even the fellow in the middle, in the back resembles Henry Fonda from that movie. By the way, if you are not familiar with the movie or the John Steinbeck novel from which it came, it is a classic of literature and then film. 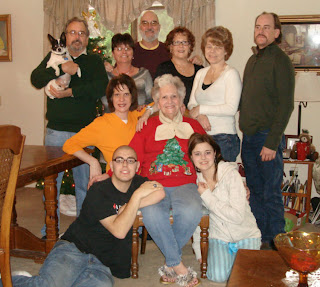 It is a story about a depression era Oklahoma family who, because of the economic devastation of the dust bowl, moves to California. Sound familiar? It is strikingly similar to the life story of Will and Bura Shepard.

The second picture was taken just this past Christmas Day in Anacortes, Washington. In the middle in the red sweatshirt is the "Queen Mother" of this clan, Maida Shepard. Starting in the upper left is Gary (with Dexter), his wife Cindy, Steve and Cindy, and Pam and Russell. Next to Maida is Barbara, and down in front are Steven Paul Shepard and Linda Shepard.

It was a white Christmas this year in Anacortes, and was so cold and snowy that travel was difficult. Darrell and his family from the Seattle area -- who are usually in the Anacortes Shepard Family Christmas picture -- were unable to make it for the celebration.

May this new year be filled with peace and fulfillment, as you find the inner strength to "be who you are and say what you feel."
--
Steve
Posted by Steve Shepard at 9:54 AM