A family is a unit
composed not only of children
but of men and women,
an occasional animal,
and the common cold.
~Ogden Nash

I hope that all is well with you and your part of our family, wherever you may be and whatever your particular sutuation is. Regardless of your political bent, it has been an exciting week for our nation. The inauguration of our 44th president, Barack Obama, has ushered in a new day with this historic election, and has brought with it a sense of renewed optimism and energy. Our Shepard ancestors have experienced American Presidencies back to the very beginning of our nation. They could not possibly have imagined the changes that we have seen in recent times. What would they have thought about the changes we see today?

Speaking of ancestors, this coming Tuesday is the anniversary of the birthday of Sadie J. Shepard Pruett, the sister of Grandad (William Shepard). Sadie was born during the leadership of our 23rd President Benjamin Harrison in 1892 in Alton, Illinois. Alton is in Madison County, Illinois, where our Shepard/Owens ancestors lived during the late 19th century. She was the second and last child of William Elmer Shepard and Elvira Owens. By the time she was 18 the family had moved to Oklahoma, which is where she met and married Levy Pruett with whom she had three daughters. Sadie lived in Oklahoma until her death in 1980.

Sadie Shepard Pruett represents a whole other side of our family that most of us know very little about, which is understandable. For one thing, none of that part of the family moved west to California when Gram and Grandad did in 1940. For another thing, none of them have the name Shepard, but instead have last names like Getz and Allred and Pruett. 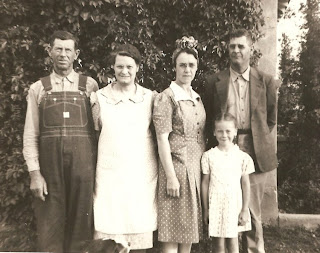 One claim to fame from this part of our family: In 1983 Sadie's granddaughter Lisa Gayle Allred, living in Fort Worth at the time, won the Miss Texas beauty contest, and was the first runner-up in the Miss World Contest the same year.

The first picture I am including is a picture of Sadie and her husband Levy Pruett with Bura and (Sadie's brother) Will Shepard. The smiling tyke in front is Bura and Will's youngest child Thelma Shepard (now Boyd). The picture was taken in June, 1942. It appears to be taken in Beaver County Oklahoma. Will and Bura and their family were living in San Diego at the time, so this picture must have been taken while they were back in Oklahoma for a summer vacation. 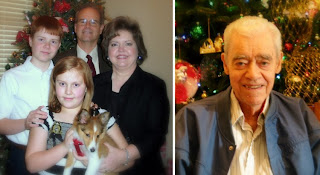 The second picture shows a recent holiday scene of Elmer Shepard (on the right) and his son Dane, Dane's wife Cindy, and their children Nathan and Kaylan. Dane, of course, will be hosting the Shepard family reunion this summer. The reunion is not that far off -- Saturday, July 18 in Oklahoma City -- so clear your calendars and make your plans. More details will be forthcoming about the exact location, directions, housing possibilities, and other specifics. It will be a very special event and we hope you will make it!
--
Steve
Posted by Steve Shepard at 10:00 AM

I stumbled across your blog while searching for information about my ggggrandfather John Pouty Williams.
Your site is very informative. Thank-you for sharing. My connection is through John Fleming Williams, Margaret Frances Williams-Spear's brother. I would be interested in communicating with you if you are so inclined. Please contact me at:
islandlvr4vr@yahoo.com
I am the gatekeeper411 on ancestry.com
Thank-you