Family life is full of major and minor crises
the ups and downs of health, success and failure
in career, marriage, and divorce.
With all of these felt details,
life etches itself into memory and personality.
It's difficult to imagine anything
more nourishing to the soul.
-- Thomas Moore

Greetings to y'all on this first day of spring! In our day of well heated homes, the coming of spring does not mean what it did 100 years ago. At that time many of our people lived in places where keeping warm through the winter required a major effort, making spring a very appealing time with the promise of better weather.

That was especially true of our Indiana ancestors, including Maggie (Margaret Frances) Williams (1845-1904), who was Gram's (Bura Davis') grandmother. She lived her whole life near Spencer, Indiana where the winters can be harsh. Maggie was the baby of the 9 children born to Sarah and John Pouty Williams. In the early spring of 1861, when Maggie was just 15, her 21 year old sister Callie (Caroline Matilda Williams), married a young man named William Spear. Though this wedding took place as the Civil War was beginning, it must have been a happy occasion, especially for the impressionable teenager Maggie.

Just two years later Callie -- only 23 at the time -- died while giving birth to her and William's first child (Isolena Belle Spear). The family was crushed, especially young Maggie. In the ensuing months, as her grief subsided, she fell in love with the young widower William, and two years later, in January of 1865, they were married. She was just 19, he was 34.

Over the next 17 years Maggie and William brought 8 children into the world, and might have had more if he had not died the year after their youngest arrived. But their first one was special. It was a baby girl who they decided to name Caroline Matilda, after Maggie's late sister, and William's first wife. This Callie would later become the mother of Bura Davis, and the great grandmother of those of my generation.
Among Callie Spear Davis' great grandchildren is 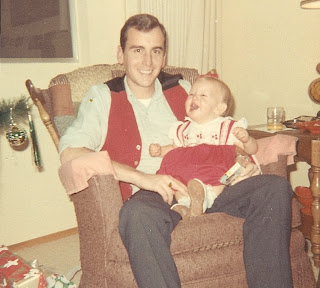 Gary Shepard -- Maida and Eugene's oldest -- whose birthday is this coming Monday. Gary, lives in Oak Harbor, Washington with his wife Cindy, and has three children -- Kerri Aquiningoc, Jason Shepard and Kelly Sauvage -- and 4 grandchildren, all of whom live in or near Weatherford, Texas. Gary is retired and enjoys cooking, occasional weekends at their lake house, spending time with their dog Dexter, visiting his mom Maida in Anacortes, and being involved in his church in Oak Harbor. And he does not seem to miss the San Diego area at all, which is where he spent nearly his entire life until 6 years ago. Happy Birthday, Gary!

The first picture I am sending shows Gary with his oldest daughter Kerri on his lap at Christmas 1968. The picture was taken in San Diego. Gary and his wife Jackie had moved back to San Diego 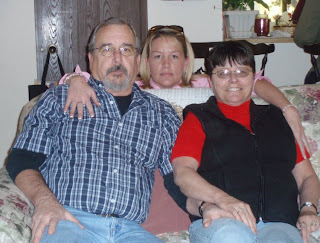 earlier that year after a couple of years in Michigan, where Kerri was born.

The second picture I am including was taken (39 Christmases later!) in Anacortes, Washington and shows Gary and his wife Cindy, with Cindy's daughter Samantha McGauran of Spanaway, Washington.

Be sure and make your plans for the Shepard Family Reunion this summer on Saturday, July 18 at the Newcastle Community Center, Newcastle, Oklahoma.