Greetings this morning from Southern California as we continue to "caress our history" by celebrating the family we are. I invite you to ponder the following poem which is part of a longer piece titled Family Reunion by Jeredith Merrin. It beckons us to gain perspective on our family history, to "put your arms around" it, to pay attention to it.


Almost everyone has separated
from the landscape of childhood.

most are cut off from their own
histories, each of which waits
like a child left at day care.
What if you turned back for a moment

and put your arms around yours?
Yes, you might be late for work;
no, your history doesn't smell sweet
like a toddler's head. But look

at those small round wrists,
that short-legged, comical walk.
Caress your history—who else will?
Promise to come back later.

Pay attention when it asks you
simple questions: Where are we going?
Is it scary? What happened? Can
I have more now? Who is that?

Happy Birthday to Kerri Shepard Aquiningoc who celebrated this past Tuesday! Kerri was born and raised in San Diego but now lives in Weatherford, Texas with her friend Wade and her daughters Lyndsey and Mandi. She works in Ft Worth, Texas for Hallmark Insurance Group. Kerri, Lyndsey and Mandi are part of our family who moved from California to Texas 10 years ago.

The first picture I am including today is actually a set of pictures of birthday girl Kerri. (You can click on the picture to see a larger view.) The first one was taken in 1968, the last one was taken a few months ago, and the others were at various times in between.

Another "misteak." Last week I included a picture of Darrell Shepard with Kelly Sauvage and said that Kelly was Darrell's cousin. How wrong I was, as several of you were swift to inform me (good naturedly, of course!). Kelly Shepard Sauvage of Weatherford, Texas is Darrell's niece, not his cousin. In one fell swoop I wrongly flattered Darrell and insulted Kelly! Oops. My bad.

In recent weeks I have corresponded with several members of our extended family. One of them is Pamela Williams Martin who lives in North Carolina. She stumbled across my family blog online and emailed me. She does lots of family research and it has been a joy to compare notes with her on ancestors we have in common.

Pam said this in a recent email: Our common ancestor is John Pouty Williams, who is my GGGgrandfather by way of John Fleming Williams, Joseph Preston Williams, William Harvey Williams, and Paul Edwin Williams (my dad). I was born and raised in Aurora, Illinois in the mid 1950’s, and moved to Ocean Isle Beach, North Carolina in the early 1980’s. I have three sons Bret, Robin, and Dallas, and one daughter Lindsey. In 2007, I graduated Summa Cum Laude from Florida Metropolitan University with a degree in Criminal Justice. A North Carolina State Certified Nurseryman since 1984, I protect and propagate threatened and endangered species of carnivorous plants. My passions are my children and grandson, genealogy, and crocheting. I feel wonderfully blessed to have found my fourth cousin Steve during my research on John Pouty Williams. 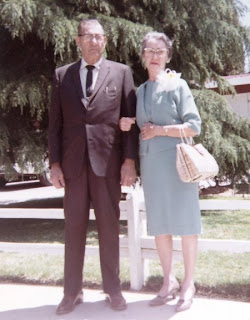 Bura Davis' (Gram's) grandmother was Margaret Francis Williams, one of the children of John Pouty Williams, mentioned above. The second picture I am including is of Will and Bura Davis Shepard (Gram and Grandad). It was taken somewhere in San Diego on Mother's Day, 1967. This is a scanned copy of one of several photographs that Kim Clark graciously let me borrow a while back, that came to her via her mother Thelma Boyd.

This just in: Congratulations to Jerry Clark and Jane Brock on the birth of grandchild number four! Brooklyn Cale Cox (little sister of big brother Drew) was born this morning to Andrew and Susan Clark Cox in Lubbock, Texas. Best wishes to them all!

Shepard Family Reunion: July 18, New Castle Community Center, Newcastle, Oklahoma. As your plans take shape, be sure to email Kim Clark or Dane Shepard and let them know if you will be attending. Or email me and I will pass the word to them.
--
Steve
Posted by Steve Shepard at 6:00 AM