In every conceivable manner,
the family is link to our past,
bridge to our future.
-- Alex Haley

This past Tuesday, as Cindy and I drove up a tree lined country lane near Spencer, Indiana, it was as if we were going back in time. Earlier that day we had left Indianapolis where we are attending the General Assembly of the Christian Church, a fellowship that I have served as a minister for over 30 years now. From Indianapolis we made our way west on I-70 and then south on Hwy 231 to Owen County. It was about an hour's drive, but it felt like going back several generations in time.

As we drove that county lane, our guide in the back seat said, "Slow down, it should be just up ahead." Our guide was Ruth Wheeler Fortner, an octogenarian from Spencer whose Ggrandfather, Charles Edward Davis, is my GGgrandfather. We had been introduced to her earlier that day, and after a short visit she had agreed to show us the way.

I slowed down as we came up over a rise and rounded a slight curve, and there it was on the right, at the corner of Rattlesnake Creek Rd. and Shepard Patrick Rd. (You read that right: Shepard Patrick Rd.) We were looking for the New Union Church of Christ, which had been the spiritual home to several dozen of our Davis kinfolk, including Bura Davis Shepard (1896-1986), for the first 14 years of her life. What we found instead was a beautiful, grassy, but empty corner lot.

The New Union Church had started in the 1850s. Among its very first members was my GGGgrandfather Robert Alexander Davis (1819-1866). The church had served families in these back woods for 100 years until it finally died in 1956. That's when the last few members -- including our guide Ruth Fortner -- closed the doors and joined the Spencer Church of Christ, 5 miles away. The Spencer church still has New Union's old membership book in which one can read name after name of Davis relatives, including Bura Davis ("received by immersion Aug 10, 1908" the record says), her mother and father, both her grandmothers, and her uncles Thomas and Mort (who was the minister of the New Union Church in 1924).

On arriving at the old Church's location, we parked the car and walked out onto that grassy corner lot. We could only imagine what the Church once looked like, because nothing of it remained, not a foundation, not the steps, not a plank or brick. I have an old picture of it from a book, a modest, white wooden structure with a chimney on the right side and two entrances in front, one for the men and one for the women, which was typical back then. But none of that was here now, it was simply a vacant, grassy expanse. The emptiness of what had once been a thriving country church reminded me of the transient nature of all life. One day there will be emptiness where we each now stand, and others will follow us to ponder our lives. 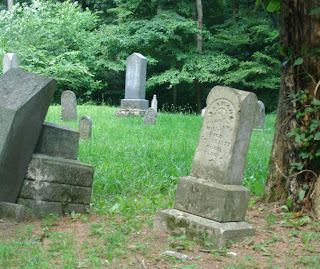 Even though we found nothing of the old church building, we did find the well-tended New Union Cemetery, which adjoins the area where the Church once stood. In the cemetery we found the final resting places of several Davis relatives. Since the church never had an indoor baptistry, nearby Rattlesnake Creek was where Bura Davis and many others were baptized during those 100 years. "Sometimes," Ruth told us, "they even had to break the ice to do baptisms. That's what they did when my mother Lucy was baptized." (Sure enough. I checked the record book: "Lucy Davis, received by immersion, Dec 11, 1916." Brrr!)

After a peaceful time at New Union, we found our way farther back into the woods (wishing I had 4 wheel drive!) to an even more secluded Pleasant Grove Cemetery, near the junction of Fish Creek Rd and Bandy Rd. Set in a quiet, sacred-feeling forest of tall green trees, it is a beautiful resting place for several other relatives, including Bura's Ggrandparents John Pouty Williams (1806-1898) and his wife Sarah Richardson Williams (1801-1877) (see picture above). 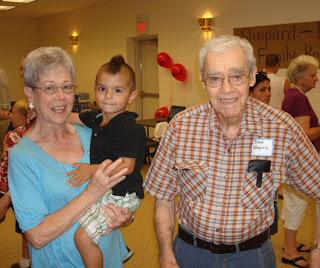 With gratitude for her help, we took Ruth back to her home in Spencer, where she has lived for nearly all of her 86 years. We then retraced our steps and found our way back to the 21st century in Indianapolis. We felt fortunate to have spent some quality time with relatives of long ago.

The closest link within our Shepard clan to our relatives in Indiana is Elmer Shepard, second child of Bura Davis Shepard, who was born in 1918 just 8 years after she moved with her family to Oklahoma. The second picture I am including today shows the two surviving children of Bura Davis and Will Shepard: Elmer Shepard and Thelma Shepard Boyd. Thelma is holding her Ggrandson Damian, son of Desiree and Jeremy Ortiz of El Cajon, California. This picture was taken at the recent family reunion in Newcastle, Oklahoma, where Damian and Elmer were recognized for being the oldest and youngest persons in attendance at 2 and 92 years old.