If you cannot get rid of the family skeleton,
you may as well make it dance.-George Bernard Shaw

It is a pleasant, warm summer day here in San Diego, in contrast to some of you who may be enduring scorching summer heat in your part of the world. Thanks to my brother Darrell for suggesting the quote at the top, from George Bernard Shaw. Food for thought: which particular family skeletons would you like to make dance? Just asking. ;-)

Cindy and I are now home from our pilgrimage to Indiana which was primarily to attend the General Assembly of the Christian Church (Disciples of Christ) in Indianapolis. But as I mentioned last week, it also gave us a chance to visit the birthplaces of some Indiana ancestors and learn some valuable things about our roots.

REGARDING OUR SHEPARD ROOTS. This past Monday, on our way out of Indianapolis, we stopped at the Indiana State Archives just off I-70 in that city to research our Shepard ancestors. The attendant we met searched the archives and -- lo and behold! -- found the Civil War service record for William Shepard (1835 -1862), who was my grandfather's grandfather. (The two men share the same name.)

We then drove 2 hours north of Indianapolis to visit the small town of Wabash, Indiana, where my grandfather Will Shepard's father William Elmer Shepard (1862-1915) was born. Wabash is also the place where Grandad's Grandfather, had enlisted in the Union Army, which resulted in his death in the Civil War in 1862. We searched the archives of their local library only to realize that there is scant information to be found about our Shepard ancestors in Wabash.

What we do know is that a young 24 year old named William Shepard shows up in the 1860 census, living in Wabash with a family named Baker. In 1861 he entered the Army, was soon wounded, and died within a year of Typhoid fever at a hospital in Evansville, Indiana, which is where he is buried today (see a picture of his grave). His son, William Elmer Shepard, was born the very year he died, 1862. 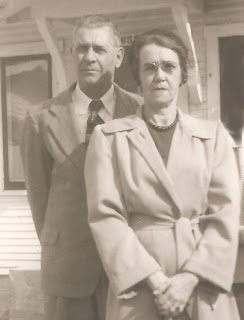 What happened to this soldier's young widow we do not know. We don't even know her name, for that matter. An old family story says that her son, W. E. Shepard, ran away from home as a teenager and was never reunited with his family in Wabash. We do know that he eventually settled in Madison County, Illinois where he started his own family, which included a son, Will Shepard, my grandfather. (See picture of him on the left in the 1950s with wife Bura).

In the early 1900s this family moved to Beaver County, Oklahoma, which is where W.E. Shepard died in 1915. Most of what we found earlier this week simply confirmed what we already knew. I am certain that there are other details to be uncovered, but finding them is difficult. Yet the effort continues.

I have more to share about our trip to Indiana, but I need to leave it there for now and move on to matters relating to "live" people. Dane Shepard emailed me recently to send his thanks to everyone who supported last month's family reunion, especially financially. He also sent me some recordings of Grandad Will Shepard that were made before he passed away in 1976. They are fine quality recordings that capture him talking about a variety of subjects. Dane is still in the process of converting the recordings he has to MP3 format that can be shared over the internet. We are still considering the best way to make them available to everybody. More about that in upcoming weeks.

Dane and Cindy were the host team that welcomed the reunion goers a few weeks ago to their fine town of Newcastle, and their beautiful home. One of my enduring memories of the reunion will be of sitting on their front porch, resting with several other family members after that 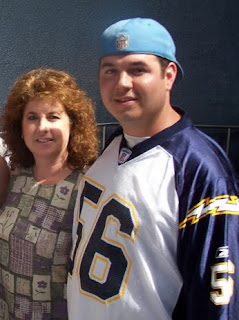 long day. We were looking out over the beautiful placid pond of their lovely "Deer Run" subdivision. Kids were romping in the grass while others were riding some kind of skate board contraption (too dangerous for my liking) and everyone was in good spirits. It was a most pleasant ending to a wonderful day. Thanks Cindy and Dane (and Nathan and Kaylan!) for your gracious hospitality.

Happy Birthday this coming Wednesday to Jeremy Ortiz of El Cajon, California. (See picture on the right with his mother Kim.) Hard working Jeremy was unable to attend the family reunion last month because of his responsibilities as manager of Pizza Hut in San Diego. But at the reunion were his grandmother Thelma Boyd, his mother Kim Clark, his wife Desiree, and his 3 children who represented their part of the family well. Among his children was mohawked Damian, who received the award for being the youngest person in attendance, at 2 years old.

Have a good week making those skeletons dance!
--
Steve
Posted by Steve Shepard at 9:32 AM

Your blog came to me via a Google search on an unrelated subject. I'm quite interested in it because your information intersects with THREE areas of my research:
1) Civil War soldiers and veterans from Wabash County, Indiana,
2) the Disciples of Christ Church in Indiana, and
3) your ancestor was residing in one of our family member’s homes in the 1860 census.

Last first -- if you haven't seen the original 1860 census page I would be happy to send it to you if you'll provide an email address. William was living in the farm household of George and Rhoda (Stradley) Baker and their young daughter Catherine. Rhoda was from a prominent family of local physicians - ie, her father Dr. Daniel W. Stradley and two brothers, Dr. Ayres and Dr. Daniel N. Stradley. Rhoda gave birth to our family member, Daniel Ayres Stradley, shortly after the 1860 census was taken in August; she died four years later at the age of 29 and her two children were partly raised by their Stradley grandparents. George Baker remarried a couple of years later and removed with his new family to Iowa and Kansas.

An interesting thing to note on the 1860 census is that your William Sheppard reported a personal property value of $550, which was no small amount then. I did a cursory search for his marriage but did not find it. I also looked for him in 1850 and found a couple of good possibilities in Ohio, but not Indiana.

Re William’s Civil War service - I’ll be happy to send you the regimental history for the 41st Indiana Infantry (aka 2nd Indiana Cavalry) - it’s quite interesting. This regiment participated in the battle at Pea Ridge, Arkansas in April 1862; Dr. James Ford (U.S. Surgeon, 8th Regiment, Wabash) had just been appointed Field Surgeon prior to that battle, so if your William was injured at Pea Ridge he could have been attended to by Dr. Ford.

Re Disciples of Christ Church - Dr. James Ford joined that church in the early 1830s in Connersville, Fayette Co., Indiana. He married America Holton, daughter of Rev. Jesse Holton of Indiana and sister of Rev. William Calender Holton of Mason Co., Kentucky - they were well-known DofC Evangelists in the early- to mid-1800s. In the 1850s, Dr. Ford was one of the founders of the Northwestern Christian University in Indianapolis - a DofC college, later renamed Butler University.

If you wish, I can give you advice on how to further research William’s Civil War records and also how to obtain a replacement headstone in Oak Hill Cemetery.