I came up out of those chilly waters
a bearcat for the Lord,
and have remained that way ever since!
-Carrie Nation
(19th Century activist)

Greetings from the cool, green mountains of the High Sierra in Northern California. Cindy and I are looking forward to a pleasant weekend here with Nathan and Chenda.

I begin on a somber note. Today would have been the 59th birthday of my younger sister Linda Shepard, who died in 1971. It has been 38 years since the car accident that took her life, but the impact of her 21 years remains indelible on those who knew her. T 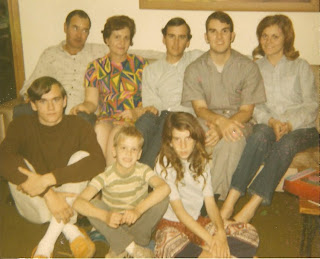 he first picture I am including was taken in 1970 and was one of the last family pictures with all 6 children. It shows Eugene and Maida Shepard on the back left. Seated next to them are Gary, me and Linda. In front are Darrell, Russell and Barbara.

We all make mistakes. Last week I sent a family picture from the 1940s in which I identified the young man in the picture as Rex Russell. The other child in the picture -- Thelma (Shepard) Boyd -- emailed me to say that the boy in the photo was NOT Rex. Instead it was Norman Getz, who was Rex's second cousin, and about the same age. (One has to work very hard to put something past Thelma!)

More About the Davises. A couple of weeks ago I mentioned Lucy Davis, the daughter of Tom Davis, and cousin of Bura Davis, all of whom were members of the New Union Church of Christ, near Spencer, Indiana about 100 years ago. Lucy had been baptized in 1916 in frozen Rattlesnake Creek, where the ice had to be broken to get her in the water. When I first heard that story, I must admit I was a little skeptical. Not just because I tend to be skeptical, but because I know how family stories DO get exaggerated sometimes! However, I have since learned that years ago, being baptized in a frozen creek was not all that unusual. For some, it even became something of a badge of honor, a point of pride. The following true story illustrates this. (I heard this in Indianapolis last month, told by TCU Church historian Newell Williams. This is my recollection and not a direct quote.)

Carrie Nation (1846-1911) was a 19th century temperance crusader adamantly opposed to the evils of drinking alcohol. She was also a member of the Stone-Campbell Movement (the movement that gave birth to the Churches of Christ, the Christian Church and the Disciples of Christ). Carrie Nation was in the habit of storming into a bar, with hatchet in hand (see her picture, hatchet and all), and driving out the drinkers and tearing up the place -- the tables and chairs, the bar, even the picture of the half naked lady behind the bar -- all "in the name of the Lord". Later a reporter asked her about such extreme behavior. She proudly reported that when she came to the Lord and was baptized, it was on the coldest day of the year. They had to saw a hole in the ice to get her into the river for baptism. "I came up out of those chilly waters a bearcat for the Lord, and have remained that way ever since!" 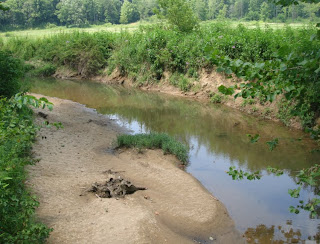 Call me a sissy, but I'm proud of my immersion in the heated waters of the indoor baptistry of the Linda Vista Church of Christ in San Diego (50 years ago last month!). Even so, you have to admire the spunk of a young person like Carrie Nation or Lucy Davis, who responds to God's call and is baptized outdoors, in the Midwest, in winter. Bura Davis was much more sensible. She had the good sense to be baptized in August! (See picture at left of Rattlesnake Creek near the New Union Church of Christ, taken this summer. This is the creek where they did their baptisms.)

I'd like to think that cousin Lucy Davis' icy December baptism in Rattlesnake Creek was something that she, like Carrie Nation, was proud of all her life. But no matter how full of pride Lucy may have been in her private moments, she would never have acted in such a rash, albeit purposeful manner as Ms. Nation. Our family has always valued modesty and decency too much for that. Lucy may have thought highly of that crusader, and may have even felt a kinship in spirit, but I doubt she would have acted with such abandon.

Even though Lucy may not have thought of her baptism as making her a "bearcat for the Lord", she was a devout Christian. Five years after her baptism, she married Frank Wheeler, who had been a fellow teen with her in the New Union Church. He had actually begun preaching at age 16, the same year as Lucy's icy baptism at age 13. (Hmm. A connection perhaps?) Their dream of a life together was cut short, however, when Frank died after just two years of marriage at age 24 of Typhoid fever while preaching for the Linton (Indiana) Church of Christ. 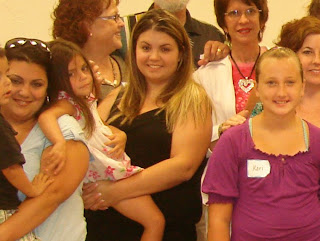 Two children were born to that short marriage: Lloyd Wheeler (who also became a Church of Christ preacher) and Ruth (Wheeler) Fortner, who Cindy and I had the pleasure of spending time with recently in Spencer, Indiana.

Happy Birthday, Amanda. This coming Tuesday is the Birthday of Amanda Ortiz, one of Will and Bura (Davis) Shepard's 20 Ggrandchildren. Amanda lives in Blue Springs, Missouri with Jeff and (her mother) Kim Clark. She was part of Thelma (Shepard) Boyd's family who attended the family reunion in Oklahoma last month. In the picture surrounding Amanda are Desiree Ortiz on the left, Cindy Shepard and Barbara Shepard in the back, and on the right are Kori Boyd (in purple) and Kim Clark. Amanda is holding her niece Ashlyn Ortiz.

Have a great week. And as these long, warm days of August continue, let the thought of an icy baptism keep you cool. And full of spunk!
--
Steve
Posted by Steve Shepard at 1:00 AM