Greetings on this beautiful fall day from the mountains of Northern California where Cindy and I are spending a few days. The record setting rains of this past Tuesday are now over, the air is clean and fresh, and there is a beautiful backdrop of tall green pines and cedars.

I am not sure exactly what G.K. Chesterton had in mind in the quote above, but I like the sentiment. It seems to me to point toward something important about the very nature of the best families. I wonder if his family was as wildly busy with activities as many of ours are. Some of our families might affectionately be described as "where the wild things are." 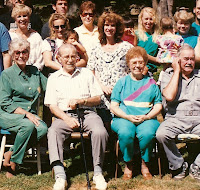 Sunday is the 101st anniversary of the birthday of Willie Davis Russell, who was Bura and Will Shepard's first son-in-law. Uncle Bill -- as many of us knew him -- was the first to marry into the family of Will and Bura when he married their daughter Pauline in 1935. Bill, who had a wonderful sense of humor, was born in Gage, Oklahoma, married Pauline Shepard in Springfield, Colorado, and moved to San Diego in 1940 where they both lived for the rest of their lives. Bill and Pauline both passed away about 10 years ago, but have the following living family members today: their son Rex Russell and their grandson Eric Russell and his wife Ruth of Red Rock, Nevada; and their granddaughter Shannon Wilk and her daughter Emma of Atchison, Kansas.

The first picture shows Bill and Pauline (Shepard) Russell at a family reunion in Anacortes, Washington in 1994. (Click on the picture to see a larger view.) Also in the picture on the front row on the left is my aunt Vicki Johnston of Oak Harbor, Washington (whose birthday also happen to be this Sunday; happy birthday to her!). My dad Eugene Shepard is also on the front row on the right. In the back are Vicki's daughter Paula Tuzzolino, Kerri Aquiningoc (holding daughter Mandi), Nathan and Cindy Shepard, Barbara Shepard, Kelly Sauvage (holding niece Lyndsey) and Pam Shepard (holding daughter Linda).

Sunday is also the birthday of Kori Lynn Boyd, the 19th Ggrandchild of Will and Bura Shepard. Thelma and Terry Boyd of Gallup, New Mexico are her grandparents; Darren and Vikki Boyd of Lakeside, California are her parents.

Vikki emailed me recently to say, Kori is doing very well, she is having fun at Hill Creek School in Santee. This picture was taken in our pool which she loves to be in when it is hot. She stays busy with school and LOTS of homework. She is currently playing Volleyball and will be starting basketball in November. Kori is the photographer in the family and loves to take pictures. We take her out whenever we can to take pictures of different things. She seems to have an eye for photography.

Tomorrow is the birthday of Art Colgain, of Kaysville, Utah, father of Havilah Colgain of West Valley City, Utah. Havilah is the daughter of Joan Shepard and the granddaughter of Elmer Shepard of Newcastle, Oklahoma. She is also the 8th Ggrandchild of Will and Bura Shepard. Happy Birthday to Art!

Last week I sent out an old 1950s picture of Will and Bura Shepard with Bura's sister Winona and husband Barney Kilpatrick. In response I heard from Winona and Barney's daughter Norma Lou (Kilpatrick) Allen of Bolivar, Missouri, who said, Thank you so much for all you do. I just sat here with a silly smile looking at Mother and Daddy (Barney and Winona) on this computer page. That is especially nice of all four of them. We did not ever live in Oklahoma. They were married and lived in Two Buttes, Colorado. We had probably been visiting family in Beaver County, OK. and continued on to California. Our family always had so much fun making those trips. It seemed like we came out every summer for a month. Thanks again.

May the wildness of your family give you great joy this week.
- - -
Steve