Our most basic instinct
is not for survival but for family.
Most of us would give our own life
for the survival of a family member,
yet we lead our daily life too often
as if we take our family for granted.
~Paul Pearshall 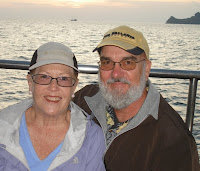 Greetings to all of you from San Diego. Cindy and I are back from our recent trip and are glad to be home. We ate too much (but never enough Greek salads!), enjoyed ourselves with friends, learned a little more Greek, saw places visited by the Apostle Paul, marveled at some spectacular Mediterranean sunsets, spend part of a day in a foreign emergency room, and took lots of pictures (click here to see some of them).

Happy Anniversary. This weekend marks the 200th anniversary of the American religious phenomenon known as the Restoration Movement, also called the Stone-Campbell Tradition. It is a great American story (and a continuing story) that deserves recognition. Actually, throughout this entire year of 2009 numerous groups of persons related to the churches of the Restoration Movement have gathered at various times to mark this milestone and celebrate the original ideals of Alexander Campbell and others. I have mentioned in recent weeks that many of our family members have been integrally involved in various congregations of this particular movement for 150 years, particularly in Churches of Christ, but also in the Christian Church. Therefore it seems appropriate to recognize and celebrate this anniversary. So hats off to all those Shepards, Davises, Millikans, Kilpatricks, Boyds, Clarks, Allens, and any others in our circle of family and friends who are members of congregations of this movement. For more information about this anniversary and its celebrations visit GreatCommunion.org.

Last week I included an old picture from 1972 in which there was a young boy whom I could not identify. Thanks to Maida and Barbara Shepard (two other people in the picture) for saving the boy from the terrible fate of anonymity. Bart Pruitt is his name, and he is the son of Harvey Pruitt, the President of the school from which Jerry Clark, who was also in the picture, had just graduated. 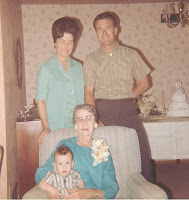 A Picture of FIRSTS. The second picture I am including this week was taken in San Diego in 1965 and shows Bura (Davis) Shepard in yet one more 4-generation-picture that our family has been fond of over the years. On the upper left is Pauline (Shepard) Russell, Bura and Will Shepard's first born. On the upper right is Rex Russell, Pauline's first born (Bura's first grandchild). The infant is Eric Russell -- Rex's first child, Pauline's first grandchild, and Bura's first great grandchild. Bura was born (as a first born child herself) in 1896, Pauline in 1916, Rex in 1936, and then Eric in 1965.

The corsage on Bura, the table in the back, and the look on her face all suggest that this was a special day for her. On the photo from which this image was taken is stamped, by the developer, the date Feb 1966. That may have been when they got around to developing that roll of film (remember those days?). My guess is that this picture was probably taken at the celebration of Bura and Will's 50th wedding anniversary, which occurred June 3, 1965. At that time Eric was 5 months old and Bura was 68, relatively young to be celebrating such a milestone.

Little did they know at the time that Bura and Will Shepard would eventually have 20 great grandchildren, born over the following 34 years. Both Bura and Pauline have since passed away, Bura 23 years ago last month, and Pauline 9 years ago this month. Rex and Eric Russell both now live in Red Rock, Nevada.

Changes and Transitions. If your email address happens to change, just drop me a line and I will gladly change it on our mailing list. Or if you know of some other family members or friends who might like to be on this mailing list, just let me know. If you need to be taken off this list, send me an email and I can do that as well. Or if you have family pictures or memories or news that you'd like to share, please let me know.
- - -
Steve