.
Our hearts grow tender
with childhood memories
and love of kindred,
and we are better
throughout the year
for having, in spirit,
become a child again
at Christmas-time.
~Laura Ingalls Wilder
Hello Shepard Family and Friends,

Greeting to all of you on this last Friday before Christmas. From our family to yours comes warm wishes for a joyful holiday celebration! 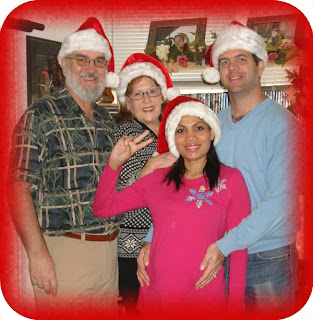 The first picture I am including today shows the four of us in Nathan and Chenda's apartment in San Francisco earlier this month. Even though this is Chenda's first real celebration of Christmas, she is in the spirit.

We will begin our celebration of Christmas after the Christmas Eve service at our church, when we pick Nathan and Chenda up at the airport at nearly midnight. Then we'll spend Christmas morning at our town house in San Diego. Later we will be with Cindy's family at her mom's house on Burgundy Street where we'll gather for a Christmas feast with assorted Harris relatives young and old.

It has been a year of amazing changes for us. Last year at this time we had not even met Chenda, our new daughter-in-law, except through the miracle of internet technology. Christmas Day a year ago we were in the early stages of our trip to Cambodia to meet her in person for the first time. Here we are a year later, she has finally been allowed into the county, she and Nathan are now married, and they are expecting next spring (with Will and Bura's 9th GGgrandchild). It has been a long time since that much change has occurred in our lives in one short year! 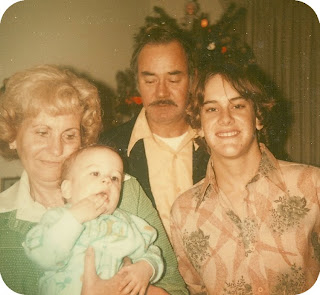 The second picture I am including today was taken in San Diego in 1977, another year of great change. Not only was it the year our son Nathan was born (the baby in the picture), it was the last year Eugene and Maida (Gower) Shepard spent in Southern California before moving to Washington State in the spring of 1978. On the right in the picture is their youngest son Russ.

Here's a story for this last week before Christmas.

After an afternoon of Christmas shopping, a man rushed into a church business meeting. Before he could even catch his breath, he heard a proposal from a well meaning young woman to buy a new Chandelier for the church social hall.

Before the head of the committee could respond to the proposal, a middle-aged man spoke up. He was the self appointed voice of reason among the group. Whenever a proposal to spend was brought forward, he always had something to say and some reason why the money should not be spent.

“I have three things to say about this request.”  He was very determined. “First, I doubt if anyone can spell the name of the thing, so we probably can't even order it. Second, I don't think something like should even be played in this church. And third, instead of this newfangled thing she is proposing, what we really need around here is more light!"

Wherever you may be on Christmas day, may your celebration be filled with the joy of family and the light of the divine. -- Steve
Posted by Steve Shepard at 5:17 AM