Christmas ...
is a piece of one's home
that one carries in one's heart.
- Freya Stark

Greetings to all of you and Merry Christmas on Christmas Eve 2009! Tomorrow the birthday of Jesus is celebrated by Christians throughout the world, but it is also the anniversary of the birthday of Granddad William Shepard (1888-1976). Will and Bura (Davis) Shepard had been married 61 years when he died in 1976 at the age of 88. The first picture I am including shows Bura and Will Shepard on Christmas Eve 1973 -- the day before Will's 85th birthday. 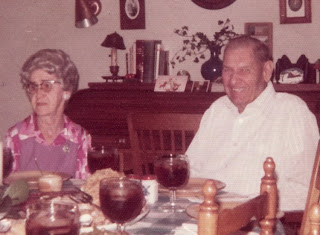 In a 1975 recording that I shared in this blog a few months ago, Granddad talked about some formative events in his life that took place nearly a hundred years ago. He talked about his proposal to Bura, and their wedding in 1915, as well as some events that lead up to their marriage. He shared that the previous December, at the age of 26, when he was courting the teenager Bura Davis, he was baptized at the urging of his father, in a horse trough that some neighbors had brought into their home. Evidently the South Flat Church of Christ in Beaver County, Oklahoma, where their families were members, did not have a baptistery. (I remember my own father, Eugene Shepard, telling of how he also was baptized in a horse trough when he was young.)
Bura's encouragement was probably also a factor in Will's decision to be baptized that December so long ago. She was the driving spiritual force in their relationship for their entire marriage, probably from the very beginning.

At that time Will's father, William Elmer Shepard, was on his death bed with stomach cancer. He himself had recently been baptized, and wanted Will to do the same before the cancer took his life. He understood well the seriousness of his illness, because in February, 1915 he died, just a few short months after Will's baptism and just a few months before Will and Bura were married in June, 1915. It was an incredibly important time in the life of these two, whose legacy we celebrate in this blog, and who we remember fondly on this anniversary of Will's birthday.

His daughter, my aunt Thelma (Shepard) Boyd, of Gallup, New Mexico, reminded me recently that the last day of November was the anniversary of Will's death in 1976. Thelma and her brother Elmer Shepard of Mustang, Oklahoma, are the only two living children of Will and Bura (Davis) Shepard. I coaxed Thelma into sharing some memories of her father, which she was glad to do.

My favorite memories of daddy was when I was maybe 5, 6 or 7 years old. We lived in the Hillcrest section of San Diego and always went to see Roy Rogers and Gene Autry movies at the Hillcrest Theater. On my birthday, he would take me to the drug store on the corner across from the theater to get a malt. I never could drink it all, but that was my thing to do.

When we first moved to San Diego in 1940, I remember him leaving everyday. I really don't know where he was going, but I'm assuming it was to work. In the back of my mind, I'm thinking he worked for Bea and Harold (Bea was Harriet Gibb's daughter). I think they had a shoe store downtown. They are the ones that got us to move to San Diego when I was just 4. When it was time for daddy to come home, I would see him coming down the street from the bus stop and I would run to meet him and put my hand in his jacket pocket. There was always a Milky Way candy bar there for me. In San Diego we first lived on Granada Street and then moved to Albatross Street. I think daddy went to work for Convair when we lived on Albatross. 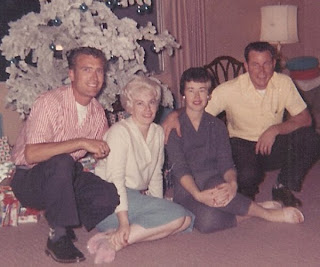 The only memory of him from when we lived in Two Buttes, Colorado (1928-1940) was when I was probably 3 1/2. It had snowed a lot and there was a big drift out our back door. Rex Russell -- my nephew who was exactly two weeks younger than me -- was there and Daddy had him by the back of the shirt collar and the seat of his pants. He was swinging him out the door, like he was going to throw him in the snow. That looked like fun, so I wanted him to do that to me. He did, but it shocked me when daddy actually threw me in the snow! I didn't get hurt. I just remember him pulling me out and standing me up in the kitchen and drying me off.

I don't remember any Christmas until the next year when my sister and brother-in-law Pauline and Bill Russell (Rex's parents) moved to San Diego and we all lived together.

Rex and I were "two peas in a pod" when we lived in Colorado. Mother and Daddy always said the way they could keep track of us was by the dog we had. His name was Ole Red. He was as tall as the two of us and he had a long tail that always stood up in the air. If they could see his tail when we were out in the field, they knew we were right there with him.

The second picture I am including today is from Christmas 1960 and shows Rex and Ellen Russell (on the left) with Terry and Thelma (Shepard) Boyd - each of them in their 20s. They are in front of a Christmas tree at Bill and Pauline (Shepard) Russell's home on Mandalay Place in San Diego.

As we celebrate the birth of Jesus, may good memories of Christmases past fill your heart, and lift your spirit for the year to come.
- - -
Steve
Posted by Steve Shepard at 8:00 AM