Greetings from our home in San Diego where the sun is shining and the living is great in these latter days of winter 2010.

Texas Emails. Jerry Clark of Lubbock, Texas emailed me this past week to confirm that he was indeed the photographer of the picture that I included last week of 5 Shepard siblings, taken in 1983 in Anacortes, Washington. How in the world he got that motley crew to pose so well for him I do not know. But I am glad that he did! 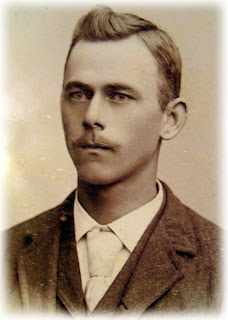 I also received an email this past week from Larry Davis of Dallas, Texas with updated information on his particular part of our family. Larry has been a reader of this blog for some time. He is one of the nephews of my grandparents Will and Bura (Davis) Shepard, and a first cousin of my father Eugene Shepard, who died back in 2003.

Cousins Galore. Larry and my dad were 2 of 31 first cousins who were grandchildren of James and Callie Davis. (See the first picture of James Davis, taken in the 1890s.) I have mentioned before in this blog that James and Callie had 7 children, including Larry's father Lawrence Davis and my grandmother Bura (Davis) Shepard. See a picture of all 7 children with their parents.

For those 7 children to have a total of 31 offspring is not an extraordinary number for the early to mid 20th century, but it still makes for a very large extended family. I am one of 12 first cousins on my dad's side of my family and that seems large. But 31? Those 31 cousins -- born between 1916 and 1949 - account for an extended family of several hundred people today. 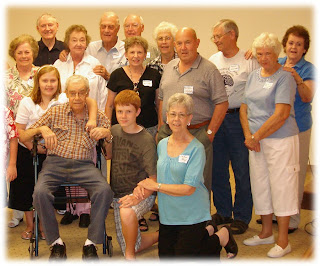 The second picture I am including shows 9 (of the 31) cousins who were gathered at the Shepard/ Davis Family reunion last summer. (Click the pic for a larger view.) Beginning upper left are: Virginia Jenkins Niles (with husband Harold), Arthur Jenkins (with wife Grace), Gary Millikan (with wife Barbara), Charlotte Davis Taylor (with husband Terrel), Arlen Millikan, Jessie Davis Bushong, and Kathy Davis Villanueva. Seated is Elmer Shepard (the oldest surviving cousin) and his sister Thelma Shepard Boyd. The two children are Kaylan and Nathan Shepard, Elmer's grandchildren and among the younger descendants of James and Callie Davis.

In the email from Larry Davis this past week, he referred to his older brother Ronald Davis, who died in 1998. When I first began research into our family back in the late 1980s, Ronald was a great source of information. He had done a tremendous amount of family research at that time, copies of which he graciously sent to me, and which I still find very helpful today. We can all be grateful for Ronald and the family work he did. He was undoubtedly the first compiler of our family tree to gather his information on a computer.

Who Do You Think You Are? I have received announcements about a new TV series that begins on Fridays starting this evening on NBC titled "Who Do You Think You Are?" It is about different celebrities and their search for their family roots. This evening's program concerns "Sarah Jessica Parker on her journey through family history as she discovers an ancestor involved in the Salem Witch Trials."  For anyone interested in family history it might be worth watching. If you happen to view it, I'd be interested in your reaction.
- - -
Steve